I’m not sure how it happened, but I had never spent any time on the old B&O west of Cumberland. That all changed over the 2013 Bedford N Scale Weekend.

I set off from Bedford with a bunch of friends from The CRHS and The Railwire forum. Our first stop was just east of Garrett PA, where we spotted a former Conrail Jordan Spreader and caught an eastbound autorack train.

Our next stop was Meyersdale, an interesting town where the former WM and B&O tracks go right through town. We heard distant horns while we were poking around, requiring a quick jog to get into position for this eastbound.

We headed east out of town, bound for Hyndman. Somehow, we caught up to the train from Meyersdale, but just barely. I had to jump out of the car and snap off this grab shot.

We called it a day after the MOW train passed, and headed back to our cabin.

I returned the next day with my friend Lee for another visit to Hyndman. Shortly after we arrived, another eastbound rack train joined us.

Due to some work being done in the Sandpatch Tunnel that had just wrapped up, Hyndman was really jumping when we arrived. Soon after that train cleared, another eastbound came by. 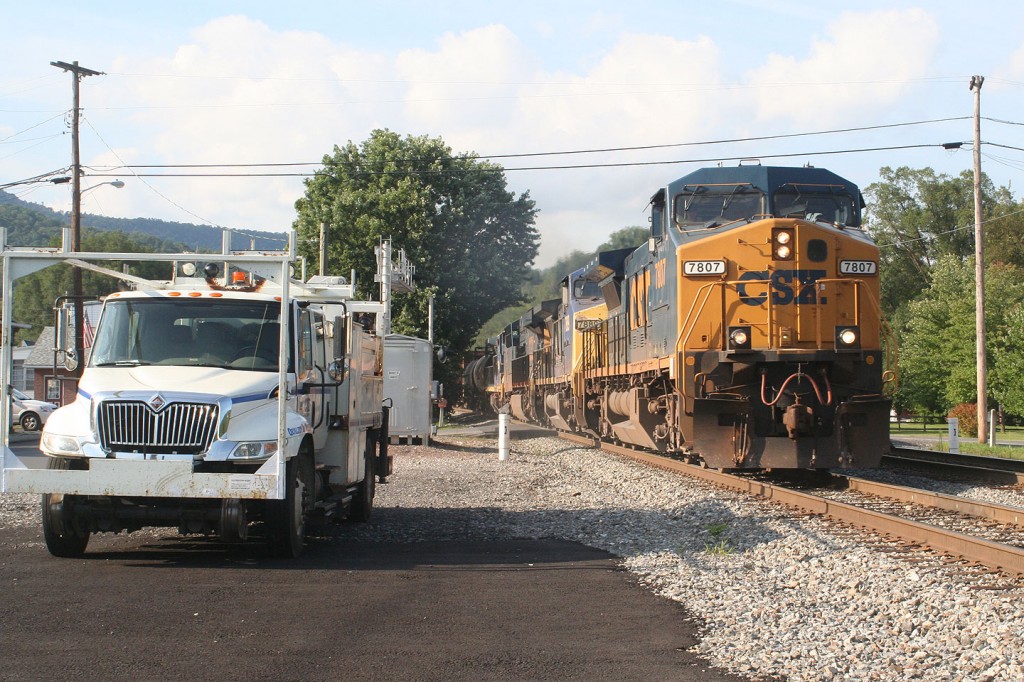 That manifest contained a bunch of interesting freight cars, including this former Conrail car.

As that eastbound disappeared out of view, a westbound pulled up.

Eventually the westbound got rolling again, trailed by a pair of GE widecab helpers.

As you could see from the color of the sun in that photo, it was starting to get late, and we had to head back home.

The CSX Allegheny crossing was an interesting change of pace from NS’s former Conrail and PRR mountain mainline with a very distinctive character. These differences really demonstrate the pioneering effort that the B&O made heading west and the lessons learned by the time the Pennsylvania did so a few years later.