I received a new lens for Christmas and was itching to try it out. So, on the first Saturday after the holidays, I headed out to the Martin State Airport MARC station. My plan had been to go try it out on some of the most challenging things to shoot: Amtrak’s NEC. However, that all changed when I got a fateful text message.

I had sent a friend a text to see if he wanted to meet up. He said he was busy, but that NS had a pair of SD80MACs on a 590 coal train at Perryville. He said that it was good to go down the NEC, so I knew I was in for something special. Not only a daytime coal train on the corridor, but one pulled by a pair of iconic former Conrail units.

Before the macs showed up, Amtrak sent a few passenger trains my way. They gave me a good chance to practice with the new hardware, which I appreciated, especially because it made me realize how good it actually was.

After a long cold wait, I finally heard 590 getting some instructions from CTEC. But they weren’t good ones (for me, anyway). First they had frozen switch problems at Gunpow interlocking. Then, just as those were clearing up, the crew went dead on the law.

They pulled the train up to a spot that was perfectly inaccessible to me, and tied it down for a crew change.

Luckily, while this was going on, I had a chance to meet up with a few fellow railfans who I’ve been wanting to meet for ages, and my friend who originally tipped me off was also able to join up.

As 590’s new crew got started, I realized we might be in for trouble. MARC had recently started weekend service, something I’ve been waiting for for years, and the first time I was about to see it? The train was going to be blocking the one I had been out freezing my various parts off for.

But the MARC train got off in time, and a meet of a different variety materialized. An Amtrak regional was coming up from behind and overtaking the MACs, giving me this wonderful view.

The SD80MACs were doing what they were built for, and the coal train was accelerating nicely by the time it got by me.

If the world hands you a perfect catch like this, many people would be tempted to pack it in and call it a day.  But how often does this happen? Barely ever. And, knowing where these guys were going, the group of assembled railfans quickly realized that we probably had enough light left to get him again heading into Consol coal at Boston St.  So we set off down I95 for Canton.

The railfan gods were really smiling on me that day. Because, as I got to the Boston St crossing, I found Canton out working. This isn’t a common occurrence on a Saturday, so I definitely wasn’t complaining.

We were still waiting for the 80MACs though, and were quickly running out of daylight. We felt that our odds were still good, though, when the car inspector rolled out to the crossing in his hi-rail. Before long, our quarry appeared, perfectly lit.

We quickly repositioned ourselves for yet another shot at him as he eased his way into the yard.

And finally, the reason he was in town: delivery coal for export. Here a former Conrail G52X carries its load to the pier. 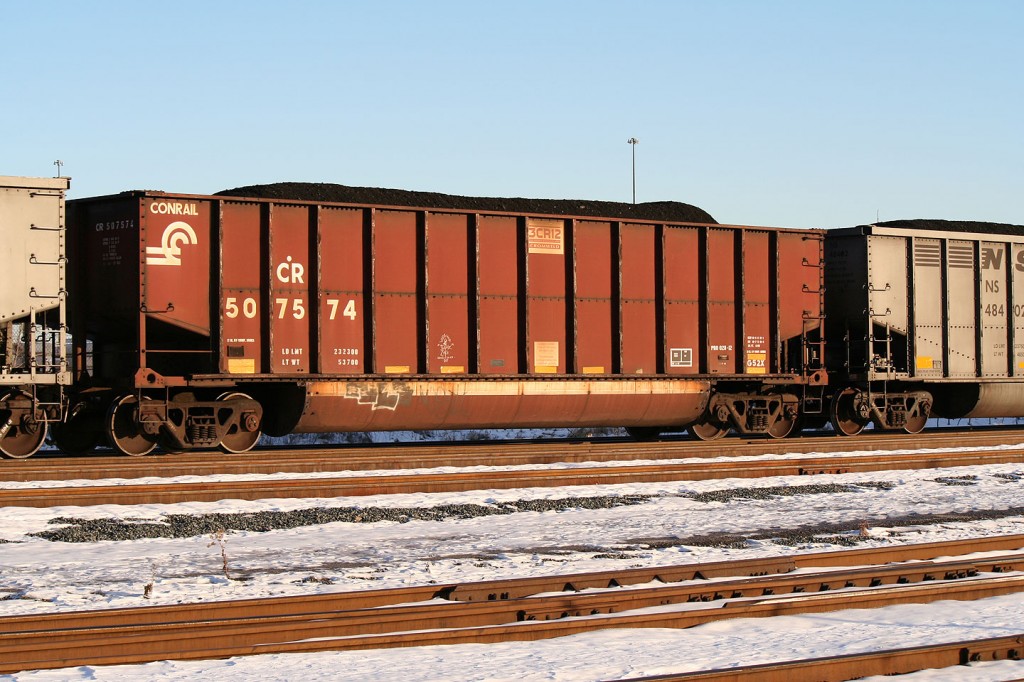 This had been an excellent day of railfanning. The photos turned out perfectly, but more importantly, I got to meet some new people.