My friend Russ organized a railfan weekend heading out to the NS Pittsburgh Line at the end of September, and it turned out to be the best weekend of railfanning that I’ve had in a long time.

Why the best weekend of railfanning? Well, it wasn’t just for the bottle of “iced tea” that traveled with me all day.

Or was it the incredible variety of great stuff we saw in the usual and unusual places?

It’s tough to tell, but it was a weekend full of both. Our first stop, as almost required on a Central or Western PA outing was Sheetz. As we were consuming our weekly allowance of saturated fat in the parking lot, we heard an eastbound blowing for the crossing.  A quick dash through the treeline yielded this eastbound manifest at “CP Sheetz”.

We then headed west, skipping our usual stop of Lewistown and going right to Huntingdon.

Huntingdon is an interesting location, with an Amtrak station, some former position light signals, and generally lots of Pennsy Ambiance.  At our time of day, it was good for eastbounds, and we were soon greeted by horns in the distance.

It turned out to be the Pennsylvanian, heading to Philadelphia from Pittsburgh. The daily Amtrak train has often had the less common GE B32-8WHs on it, but this day was a boring old P42.

Amtrak’s morning train throws an  interesting wrinkle into the dispatching of the Pittsburgh Line, since it has to run wrong main through Huntingdon and a number of other stations, to line up with the station platforms.

Next up was an eastbound slab train, also running wrong main since the dispatcher had essentially reversed the traffic flow to facilitate the Pennsylvanian making its stops.

After we were done with Huntingdon, we headed to a spot I haven’t been to before: Baree. It’s a grade crossing between Huntingdon and Spruce Creek. It wasn’t terribly exciting terrain wise, but was a nice place to spend a little while.

Of course the lighting here was wrong for all the trains that showed up. Sometimes it works well though, creating a dramatic view of something that’s otherwise somewhat boring. Having to shoot against the sun happened quite a few times over the weekend.

And, of course, because we were shooting into the sun, the really cool stuff showed up, like a manifest train lead by an SD40-2 and an SD80mac. In 2014.

Now, at this point in the day, a funny thing happened. We waited for another train, in good light, before we realized “hey, we should really go chase that SD40-2”. Here’s the train we got before we headed off for Altoona.

The chase was on. We missed him at Tyrone, and headed to Altoona where, we heard on the radio, that another amazing thing was happening. We heard that there was a pair of SD40-2 helpers dropping down to “Antis” to tie onto a westbound train.

Was that our westbound? Was it possible that we were about to have the railfan catch of the year? A TRIO of EMD’s finest leading one of their more unique points over the mountain in 2014?  We sped off to CP Altoona (formerly the location of ALTO and SLOPE interlockings) to find out.

Like sharks circling a school of fish, or vultures hovering above a rotting carcass, a number of SD40Es seemed to be hanging around CP Altoona while we waited.

Eventually our train showed up. However, much to our chagrin, the helpers that we were hoping for on it had already gone west before we arrived. Our train showed up with the (relatively) boring set of SD40Es on the front.

Even with the real interesting stuff buried, it was still a great catch.

One of the wonderful thing about photographing trains on the mountainous part of the Pittsburgh Line is that they’re great to shoot coming and going. Helpers on the back of trains mean you get two photos per train.

Before we wrapped up our time at Slope, we caught one more eastbound, which also had a bunch of interesting power on it.

We wrapped up our time at Slope and headed west for other venues. Our next stop west was in Cresson, where we caught some helpers on the tail of another eastbound, and some others tied up in the terminal there.

We then took a break for lunch at PJ’s Tavern in Cresson, one of our regular haunts while in town. It’s tough to argue with $2 beers and a large list of fried appetizers. However, a funny thing happened while we were sitting in the bar having lunch. I was informed “hey, we’re having a church crowd coming in in a few minutes, do you think you could watch the language?”. I couldn’t believe I was sushed in a bar of all places. However, I can’t really say it was out of place.

Refueled and recharged, our next stop was the classic PRR signal bridge at Summerhill, which is a great location that still feels like it retains some Pennsy heritage. Our first catch almost snuck up on us: the pair of SD40-2 helpers we had been looking for before.

Even though the sun was starting to set, there were still some interesting photo opportunities to be found. 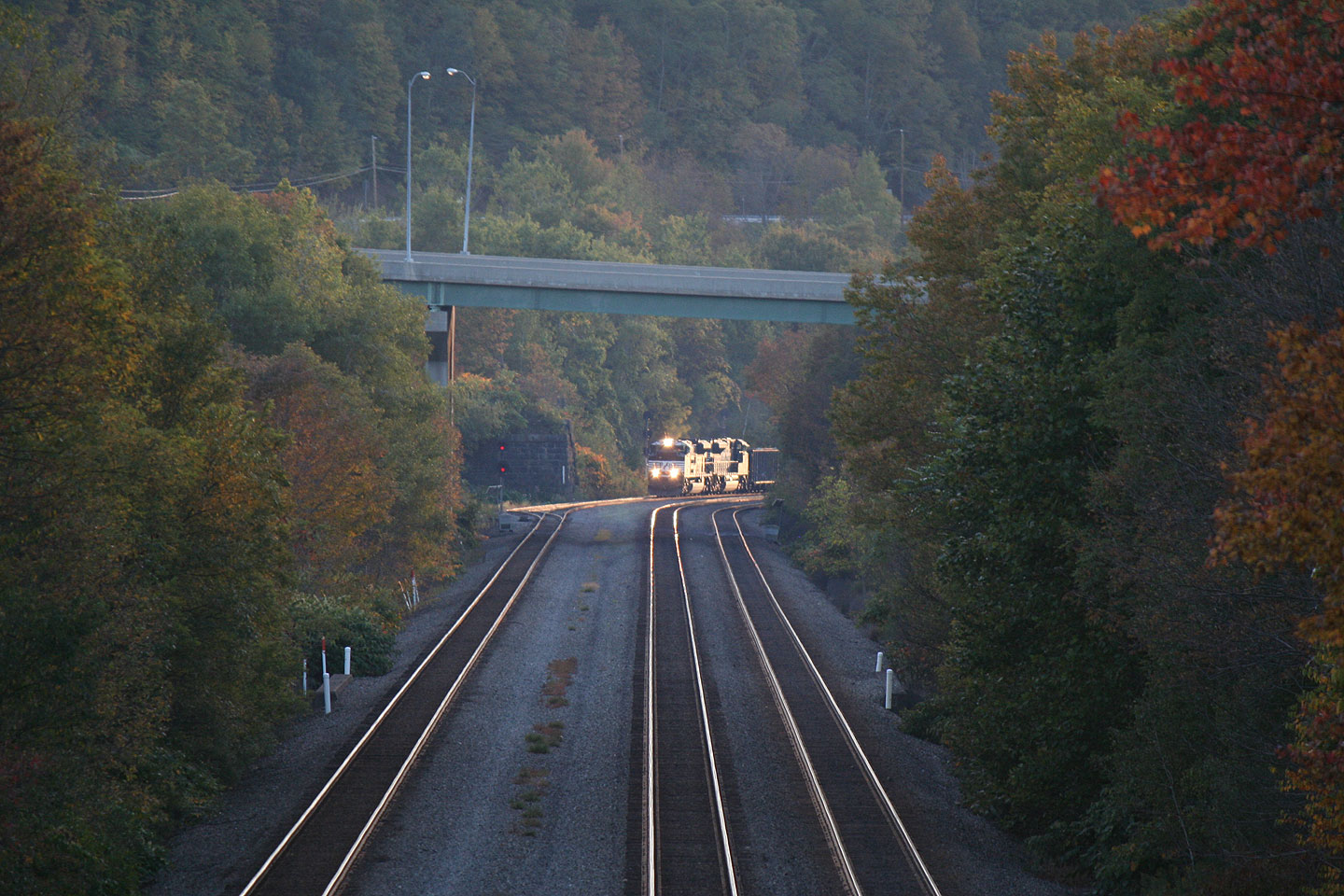 At first glance, we thought this was a coal or ballast train, but it was quickly pretty obvious that it wasn’t.

At this point, it was getting late enough to make photography difficult, so we decided to head back for the motel and a bar.

As we were heading down the highway, we saw, off to our left a trio of SD80macs down in the valley.  Half the party decided they were still done for the day, didn’t think we could get to them, and thought the light wasn’t worth it. Some of us, however, never say die, dove off the highway and went for them.

Luckily, my friend Ben, who was driving, had recently been in the area, and was somewhat familiar with the lay of the land. He got us down to the Johnstown Flood historic site, where we were first able to shoot the trio across the valley from the remains of the dam that burst, wiping out the town below.

While two of our party was messing around trying to find another hole in the trees to get them, I was busy scouting out another spot for when they got moving. Somehow I had enough cell signal to pull up Google Streetview and found another opportunity to get up close and personal. You can see what I found here.

The light was indeed pretty poor. My SLR wasn’t even up to the task, and the angles were too tight for my lens setup to work well anyway, so I shot with my phone instead. It’s a little blurry, but still worth the detour!

That photo was the end of our day. After a quick stop at the hotel to check in and freshen up, the crew headed out to the Franklin St Bar & Grill in Johnstown for what turned out to be a great time. It wasn’t a late night though, because we had a whole second day ahead of us.