Picking up from the previous day’s excitement, this one started with a run in with a friend, and then a chase for the ages up the west slope. It then continued with another great chase for some rare mileage, and finally a few minutes at Lewistown, for yet another Conrail classic unit.

Our first stop of the day was CP C in Johnstown, where we caught a Herzog train picking up some material for dispersal elsewhere. By the sound of it, it sounded like they loading up tie plates. Before he came into shootable view, however, the eastbound Amtrak train showed up with a former Pepsi Can B32-8WH.

Turning the other way, we spotted an SD40E helper set sitting in the pocket waiting for their next call to action. 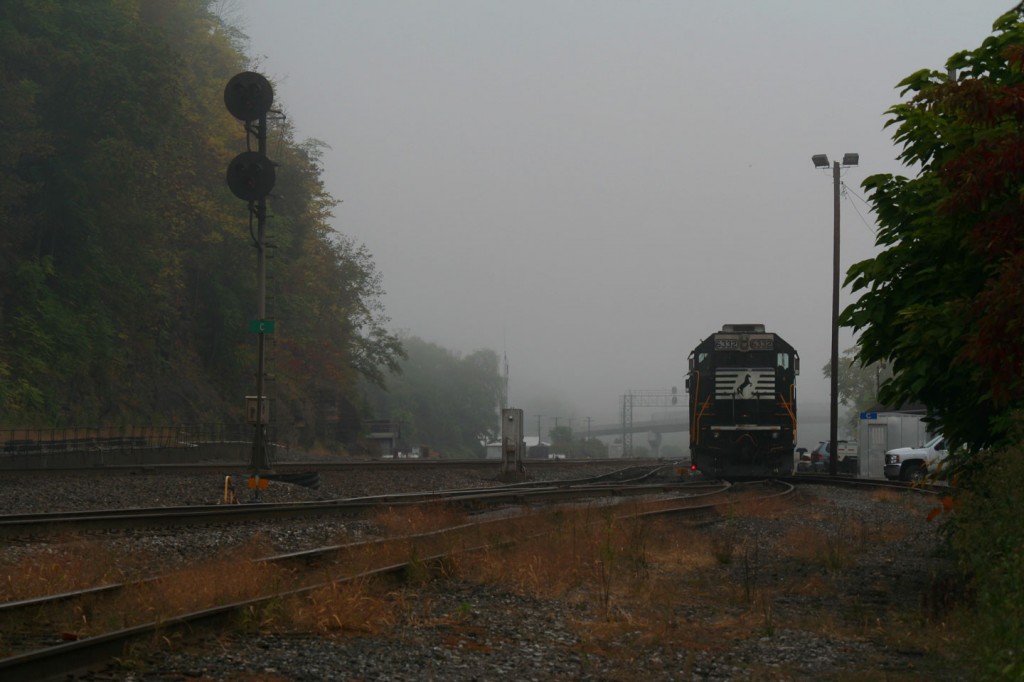 It turns out, we knew the engineer! As we were shooting away, a noted hogger and N scale modeler dropped down from the cab and came our way. We talked for a while about what was going on in the world, upcoming stuff, and the topic of the week: the previous week’s CP Altoona derailment. It was great catching up and hearing an insider’s perspective. It really is a small world.

Eventually, 10N, the train he thought he was going to have to shove appeared. He headed back to the cab and got back to work while we setup to shoot the eastbound manifest.

However, as the tail end of the train rolled through, something else appeared off to the left. Something wonderful that was about to change our leisurely plans for the rest of the day.

It was the SD40-2 helper set we had been on the lookout  for all weekend, and it was about to tie onto the tail of the train. 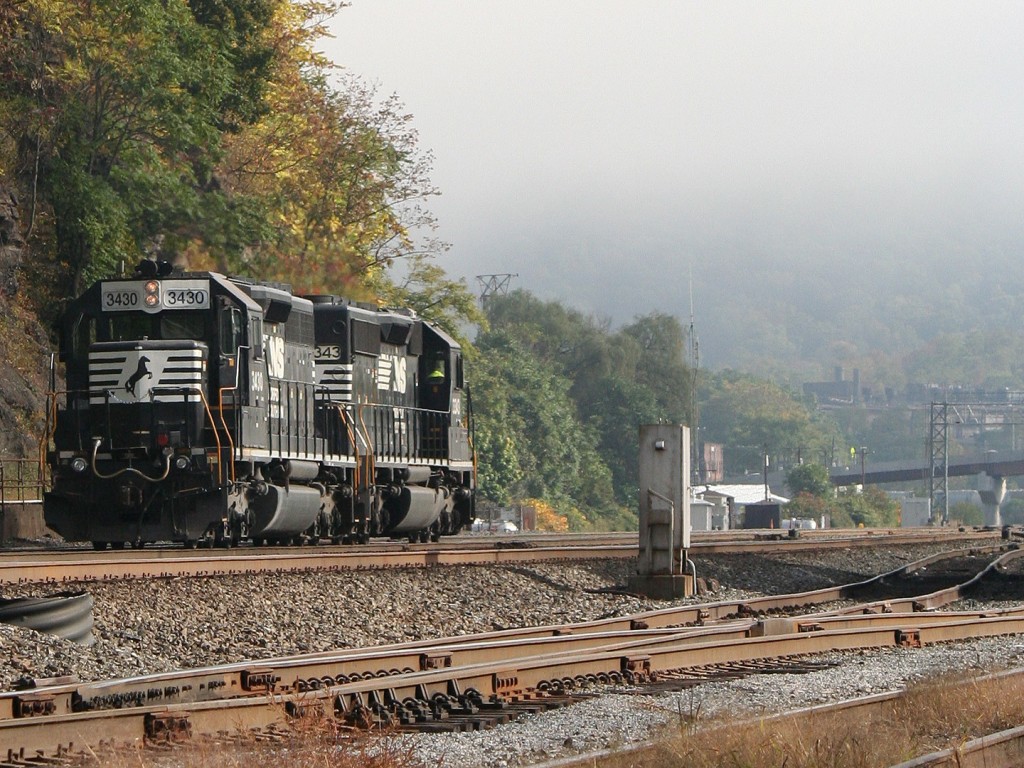 While we were photographing the Herzog train, it occurred to us that the light was good and that we should probably go chase that 10N that was still getting its act together. So, we setoff for Summerhill, the first place we thought we could catch them.

We setup for the ground level shot with the PRR signal bridge.

What we were really after was on the tail end though.

It was a quick jog back to the car and we peeled out, heading for our next setup at Lily. This part of the journey was amazing, while we paced the train up the mountain, trying to judge our relative position, cursing other drivers, and I’m sure offending the locals.

Sean and Ben (and the effects of gravity fighting steel wheels) made it happen though, getting us to Lily with plenty of time to setup for our next shots.

But it wasn’t that head Dash 9 that we were after.

We next headed to Altoona, hoping to for a “never again” shot: the SD40-2 helpers and ALTO tower, which looks like it might not be long for the world.

Of course, standing on the 17th Street bridge, I could’ve bet on what happened. Part of the crew was down at track level or on road the embankment, and I should’ve put money on these guys getting in the way of their shots.

I lucked out with my shots, being high enough to not be blocked out, but my compatriots at track level got a great broadside view of SD40Es blocking out the tower and the train.

It was going to be tough to top this chase, so we headed off to lunch to plan our next move.

Our first stop post meat fest was the turntable at Juniata shops. We ran into another 80mac (it started to seem like they were stalking us over the weekend) and some other power, including the former Susquehanna SD70Ms undergoing refurbishing. Given what it was like just a few years ago, it’s really great seeing how the traffic boom has really made NS hard up for power.

At this point, we were planning on leisurely heading back east toward home, stopping at the familiar haunts, but a crackle on the scanner changed all of that. We heard NS 10A talking to the dispatcher about getting ready to go out of Altoona.

10A/11A are manifest trains that used to run from Pittsburgh to Altoona, and were well known for having interesting power either on the way to or from Juniata shops. However, they recently have been extended to run all the way to Northumberland over the Nittany and Bald Eagle (the former PRR Bald Eagle Branch).  Catching one of them would be a great chance to see something off the well beaten trail.  The Bald Eagle Branch was recently made somewhat famous for being the set for the Unstoppable movie.

Our first setup was in Tyrone, where the tracks depart the mainline and then roll down a street through the center of town. After a bit of a wait, our train showed up.

Our first real setup was in Port Matilda, where we got our first glimpse of him at speed. I was surprised, being owned by a shortline, I thought it’d be slow going, but I was quite surprised when the train showed up roaring by at around 45.

The road is signed for speeds around 50, so while it might be a bit of a challenge catching back up if you wait around too long, it’s all very doable.

Being a passenger during the chase means pacing shots. I still cannot believe the quality I was able to get out of my cell phone on this one.

Our next setup was on the shoulder of 220.

We got ahead of him again where 220 goes under I80, but there were no photo angles for us, so we just watched him go by. It was a great chase, and more fun than just seeing the same trains we’ve seen in the same places before.

Before heading back to the NS mainline, we swung by Bellefonte PA to see what was hanging around at the Nittany & Bald Eagle’s engine house. We found some power from one of the other SEDA-COG lines basking in the sun.

It was then just a short jaunt down 322 to Lewistown, one of the “regular haunts”.

There was a good bit of action in the picture, and some interesting things on their way. 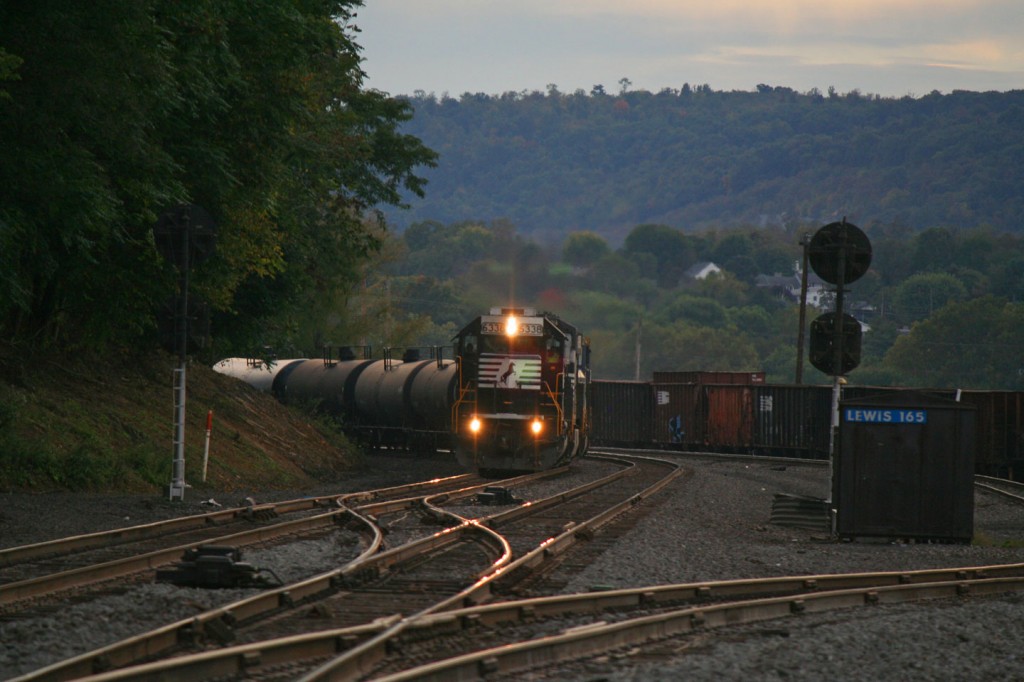 This had been one of the best weekends of railfanning in a long time. In fact, for as long as I can remember. While all of the original blue stuff was gone, we caught a lot of rather rare things (like an SD40-2 leading an SD80mac on a mainline train), caught something in rather rare locations, and generally had a great time with some friends (which, after all, is why I really go out and do this stuff).