My friend Steve is a relatively (8 months) new dad. So when he says “hey, I’m free for a Saturday, lets go railfanning”, you go! We decided to go shoot some fish in a barrel in Southern York County.

A little planning put together a good itinerary of “shoot the NCR, shoot the Stewartstown then ride it”. I reached out to some friends who had chased the NCR before and got the amused reply “they don’t go fast, should be no problem”. Good advice.

Even better, it turns out that my friend Dave was also free so the extra roominess of the back seat of the Black Shark was useful! We all met up for breakfast at the New Freedom Restaurant. It was exactly what you want: a quick no frills diner with good pancakes, mediocre coffee and scrapple.

Even though I’m a committed NCR modeler I had never chased, nor even seen, a real train on the line so we started out by doing a bit of recon. Turns out it would indeed be an easy chase with the only trouble being the unexpectedly slow 30mph speed limit on PA 851, the main chase road. This in itself wouldn’t be a huge concern (since that’s still twice the train’s speed with a tailwind) but the moving roadblocks of conscientious drivers might get in someones way in the future if track speeds ever increase.

We posted up by the station in New Freedom to wait for the first train of the day’s departure. Luckily there’s a coffee shop in the station and as my wife frequently laments, I cannot pass one without going in. 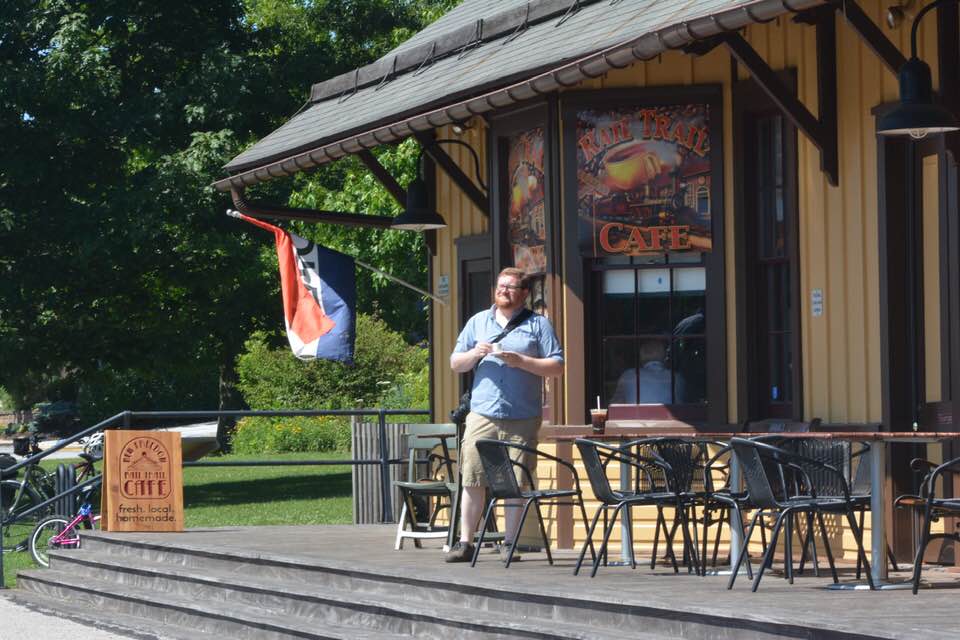 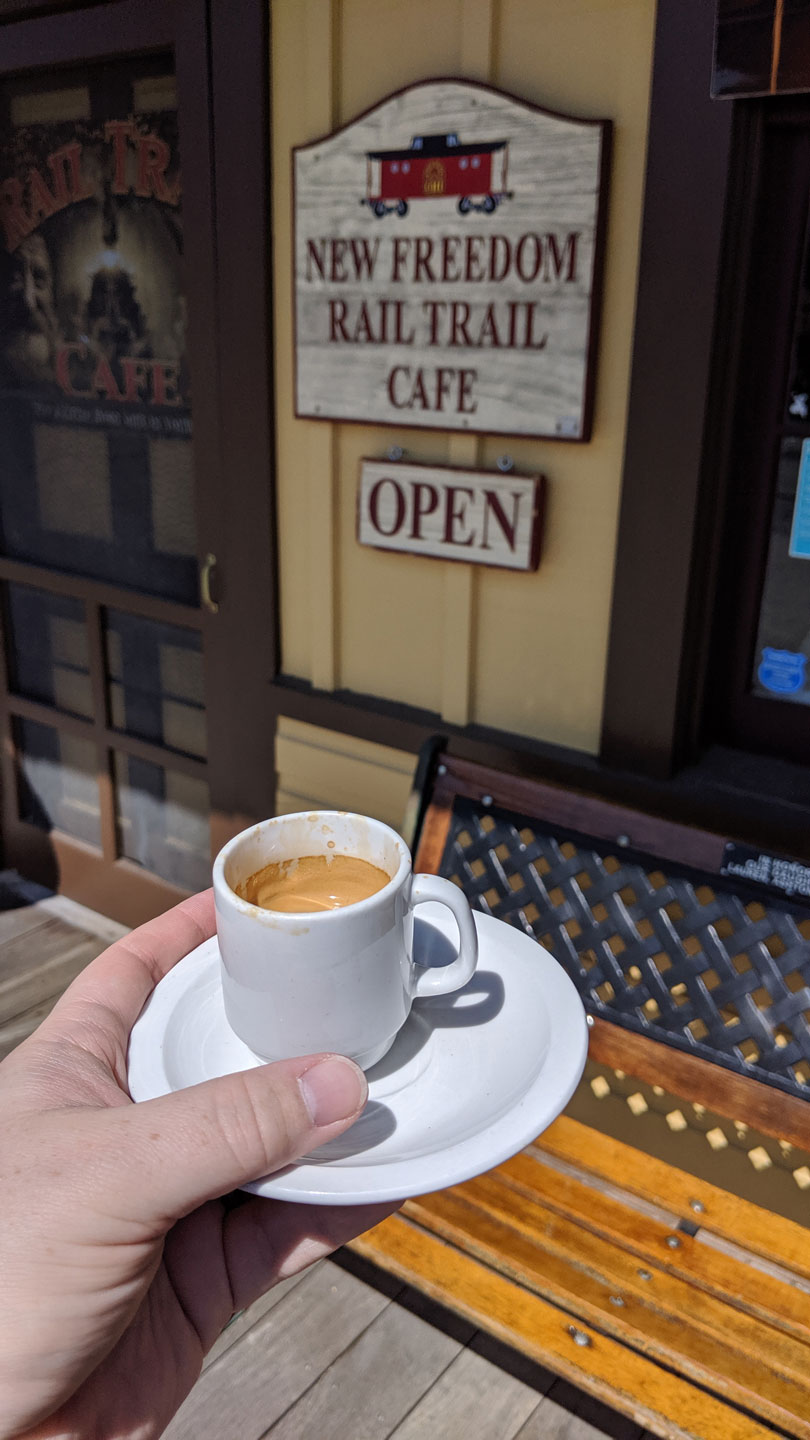 We then headed off for the shade while we waited for the 11 am departure to get going. Here he is passing the station (in reverse). 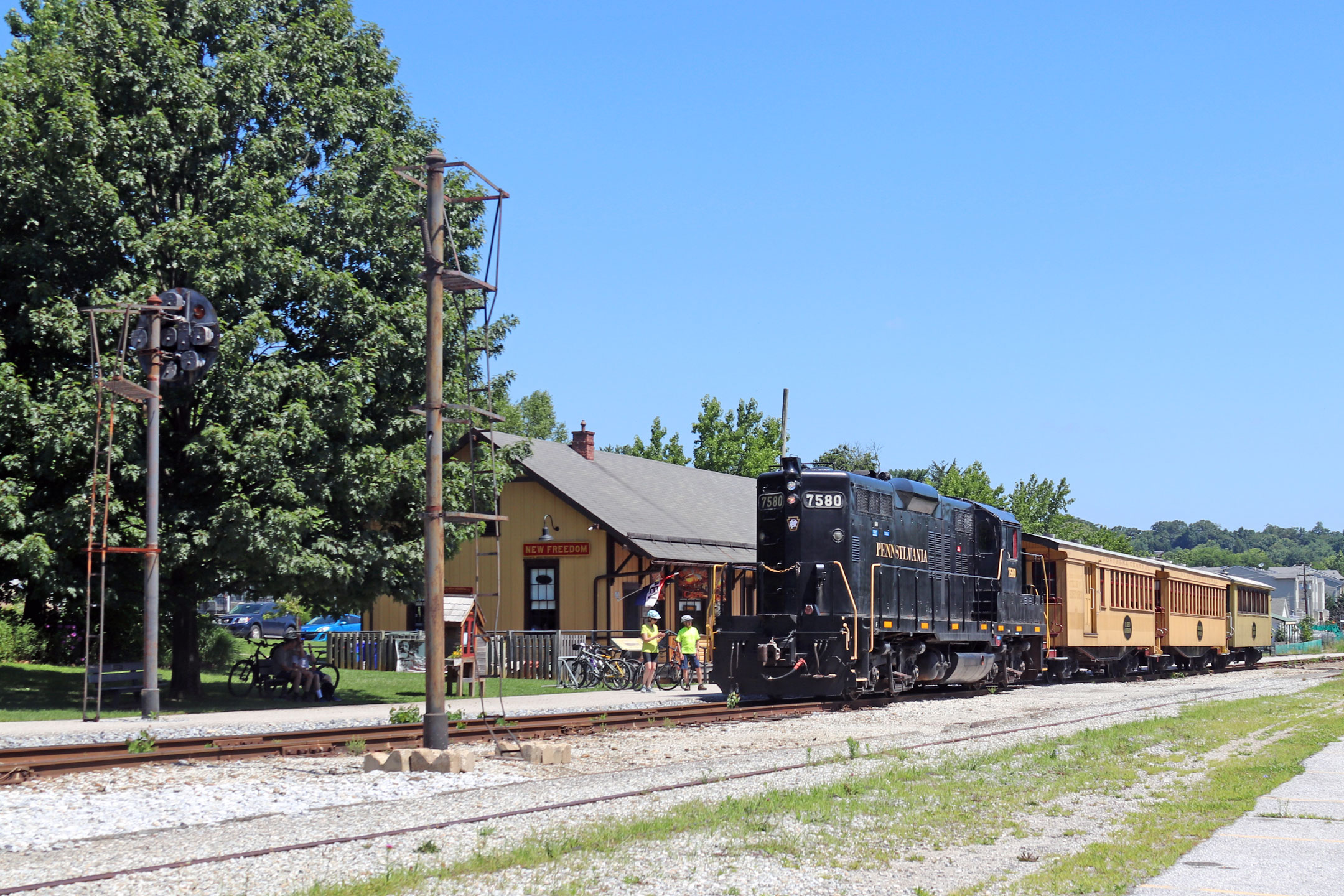 I really do have to confess that when I first saw this scene many years ago I never thought I’d see something run by it again. Also, look how much that tree has grown! Wow! 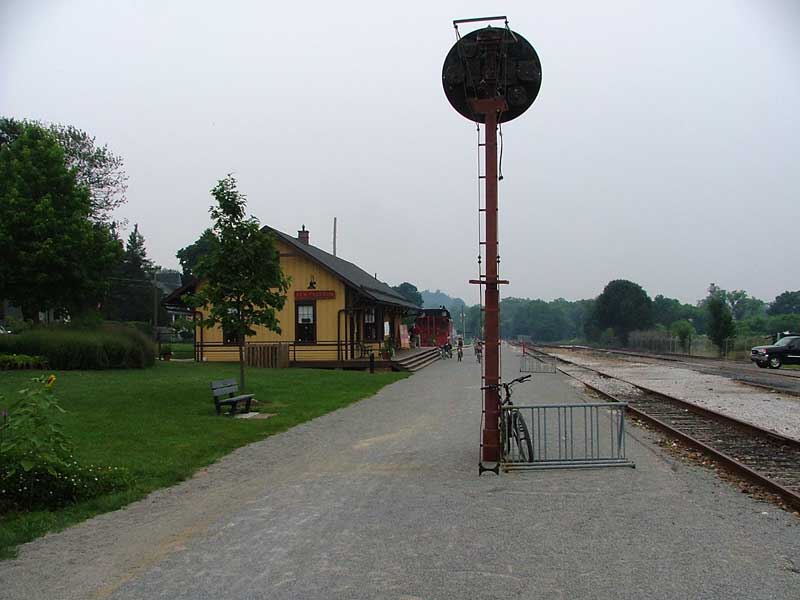 The chase was on. First stop was Kirchner Rd just outside town. There’s a nice wide open field to the left of the photo but no good place to stop and get the shot from, so we settled for this. 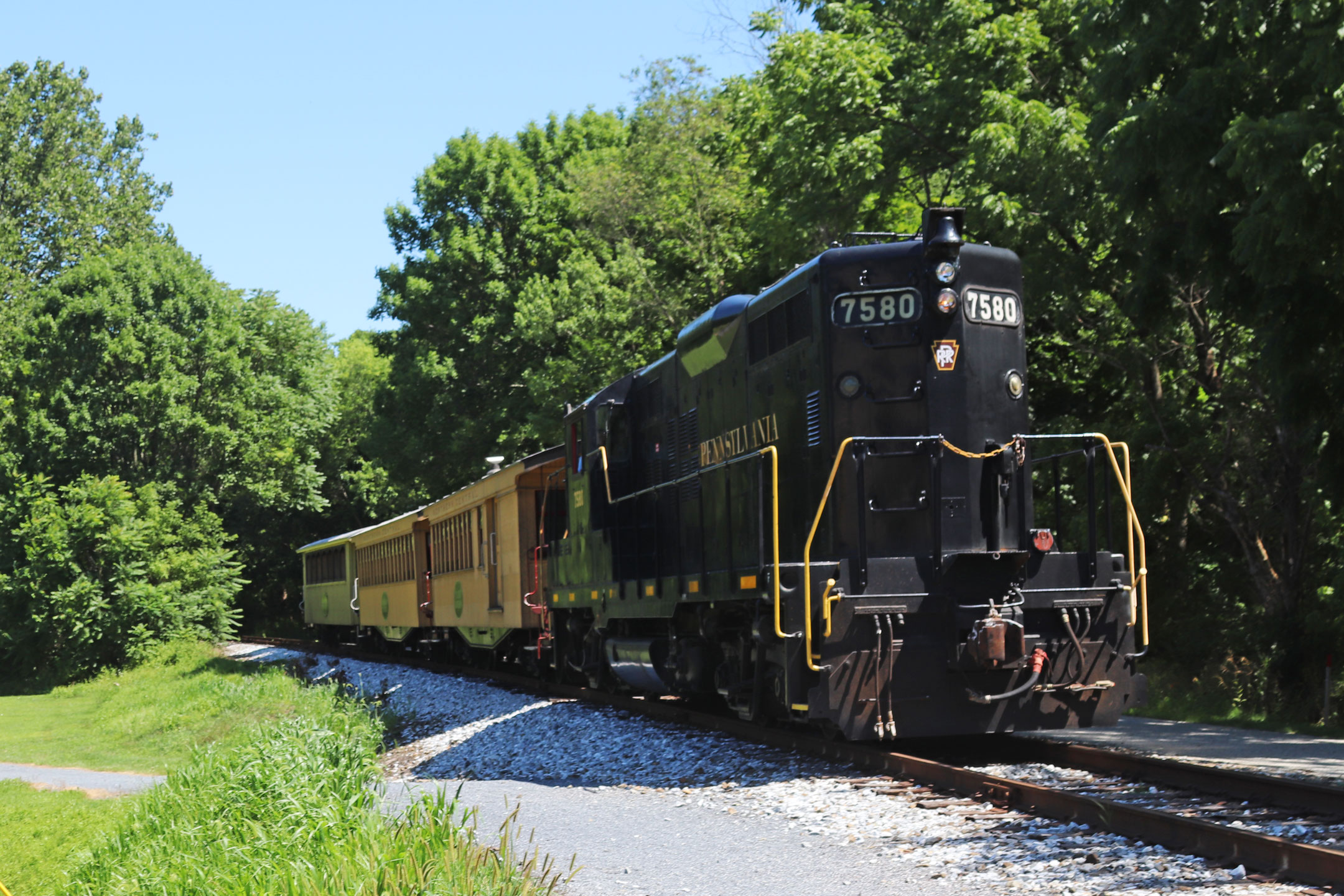 Then we put the pedal to metal and chased him further north with the idea of shooting him at Seitzland and then Glen Rock. We got to the crossing at Seitzland and waited while he rolled into view. And stopped. 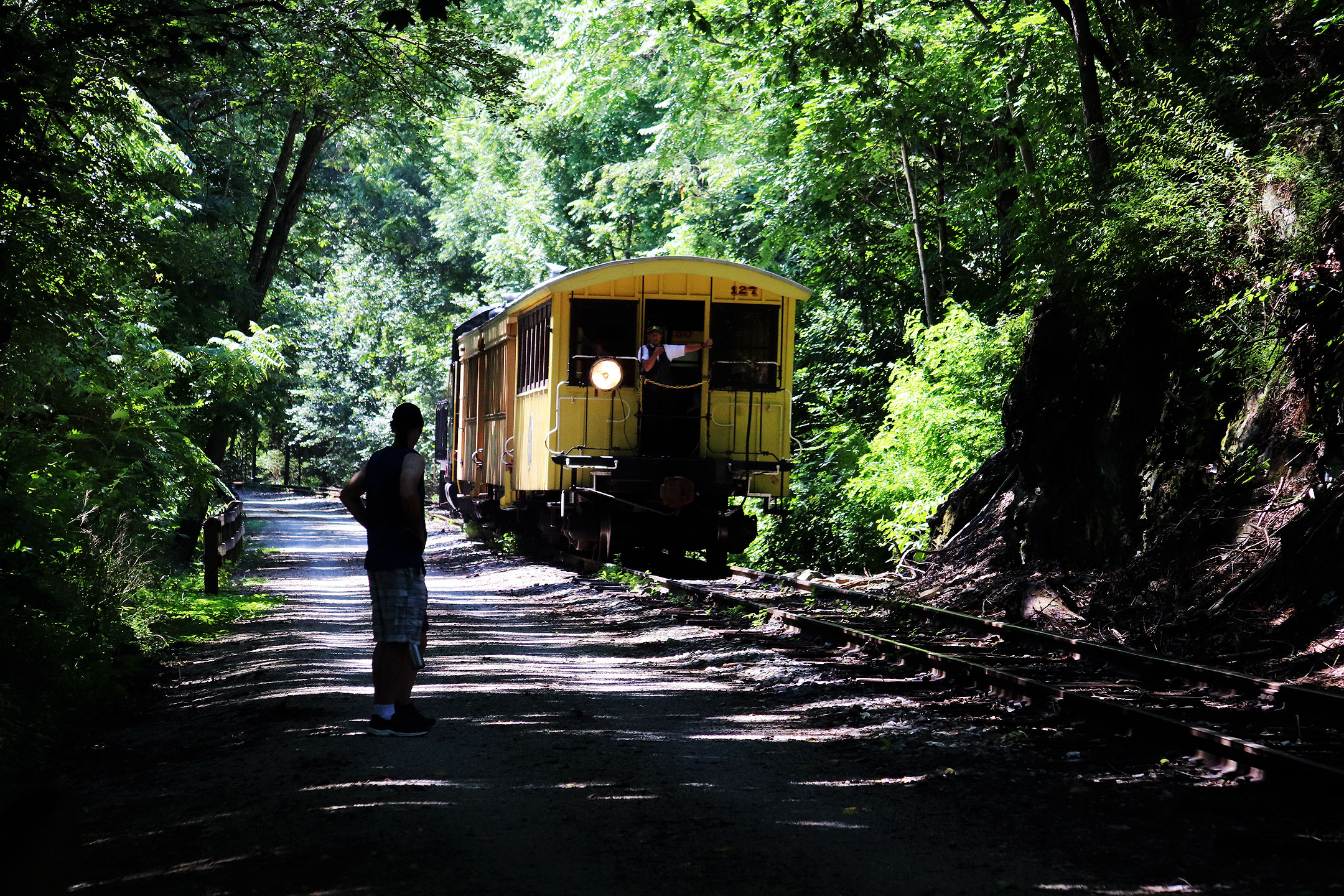 Seitzland was going to be great. There’s a great building and a small shelter. Definitely good photo props. 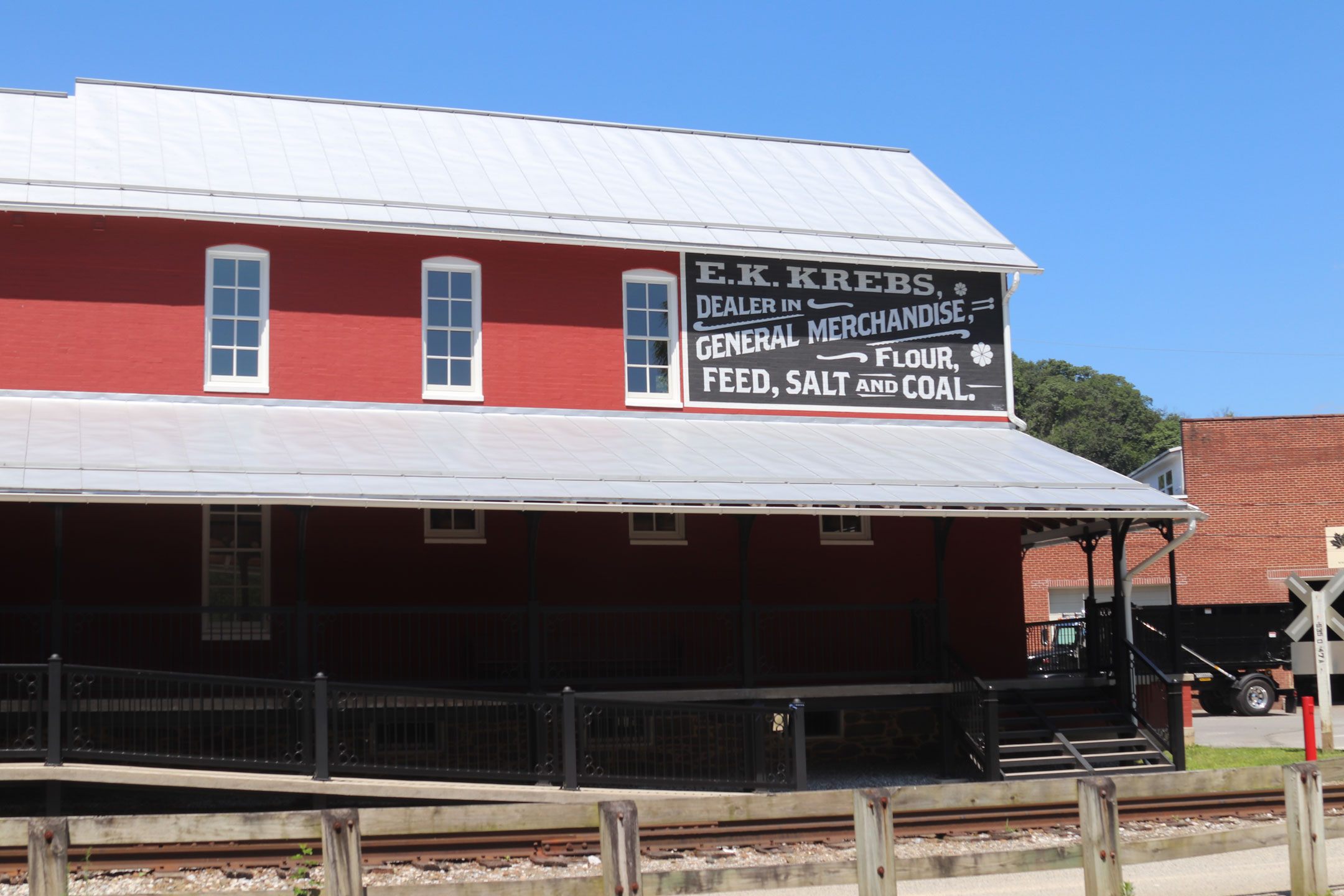 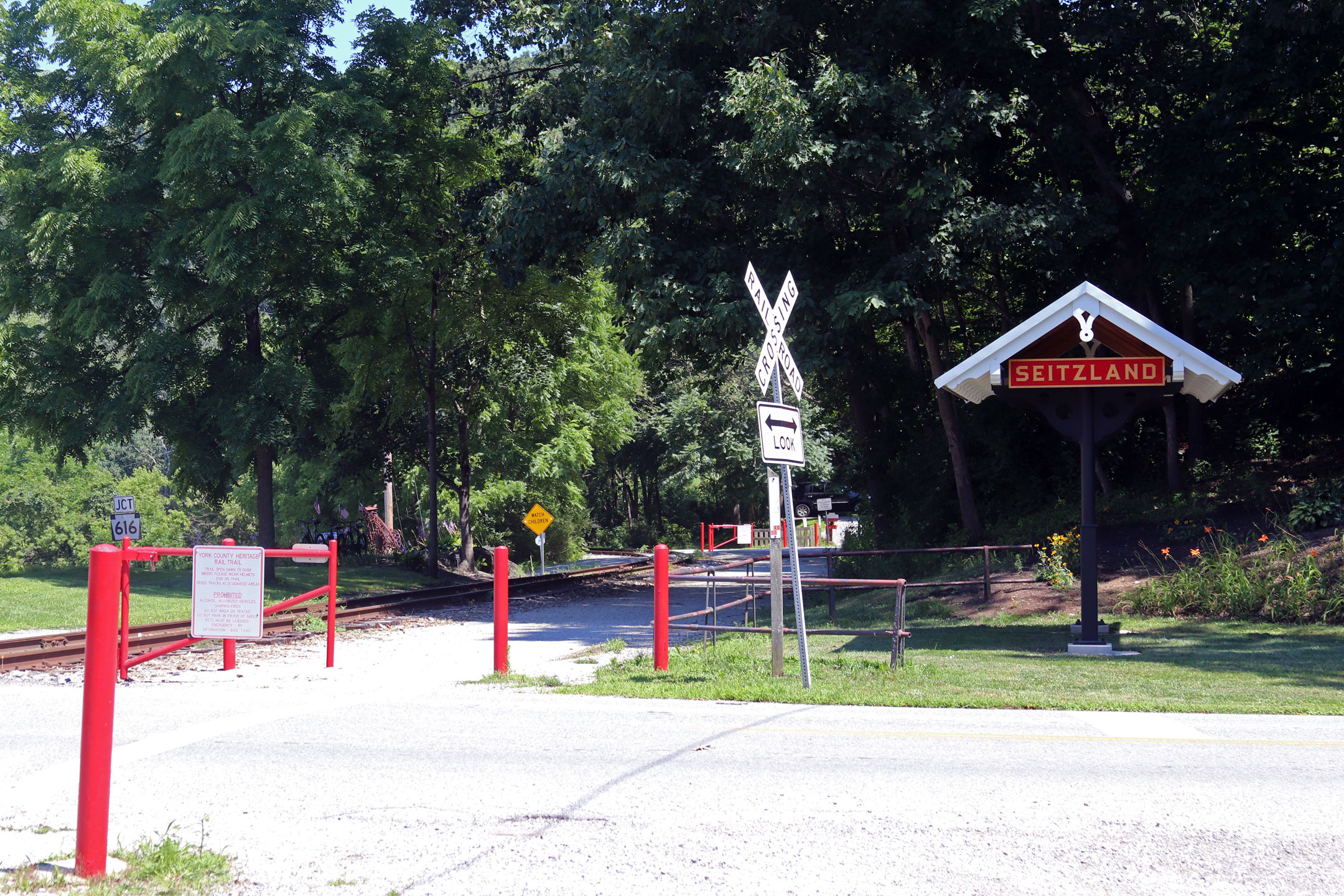 But they’re only good props if the train shows up. Apparently the “Princess Tea Party Express” trains that they were running that morning only go as far as the photo above and then turn around and head back. Dammit.

Oh well, back to town. We got him a couple of times more on the way back to New Freedom. 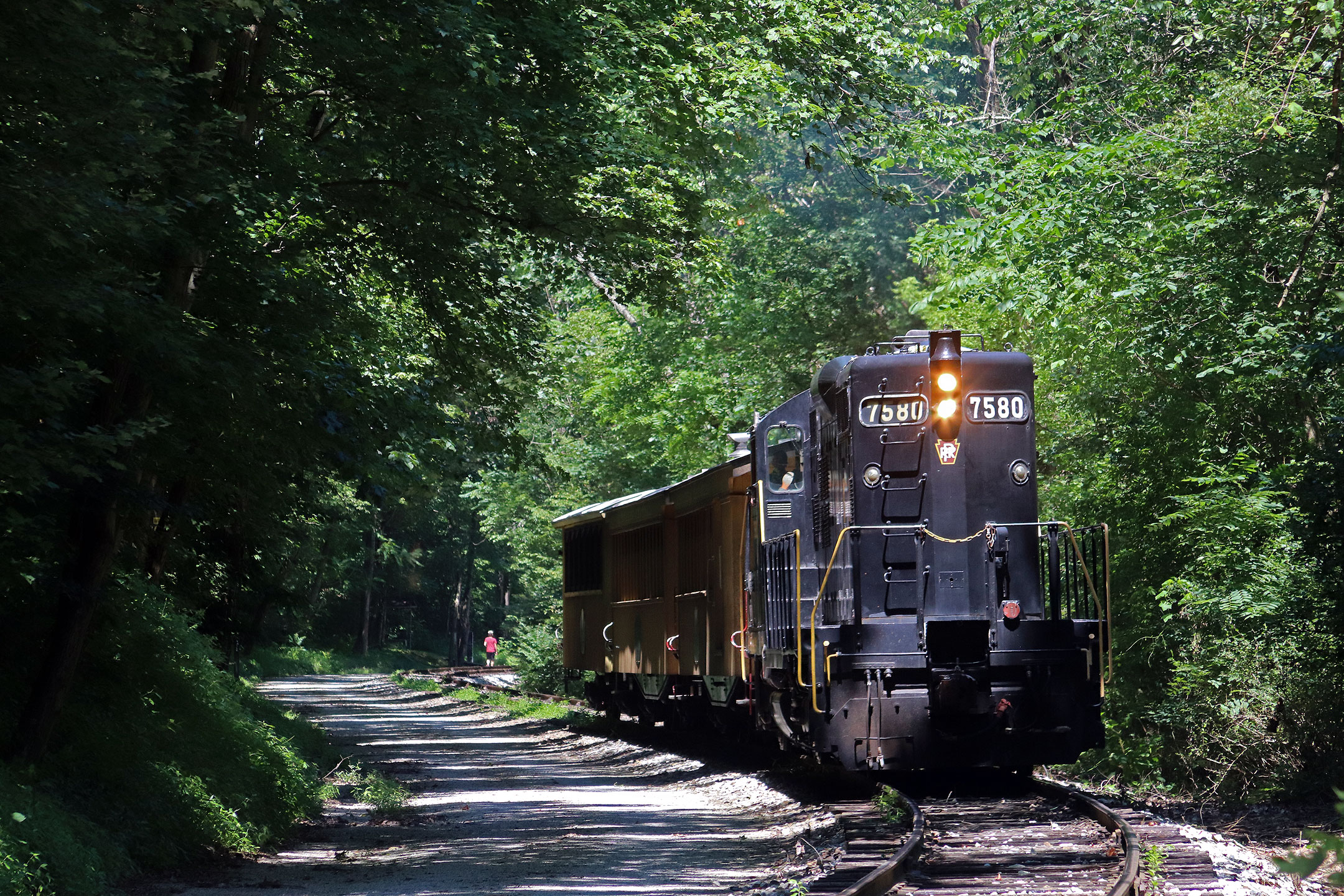 Shooting through the tree tunnel was definitely interesting. You kinda had to wait for him to poke into pockets of sun. 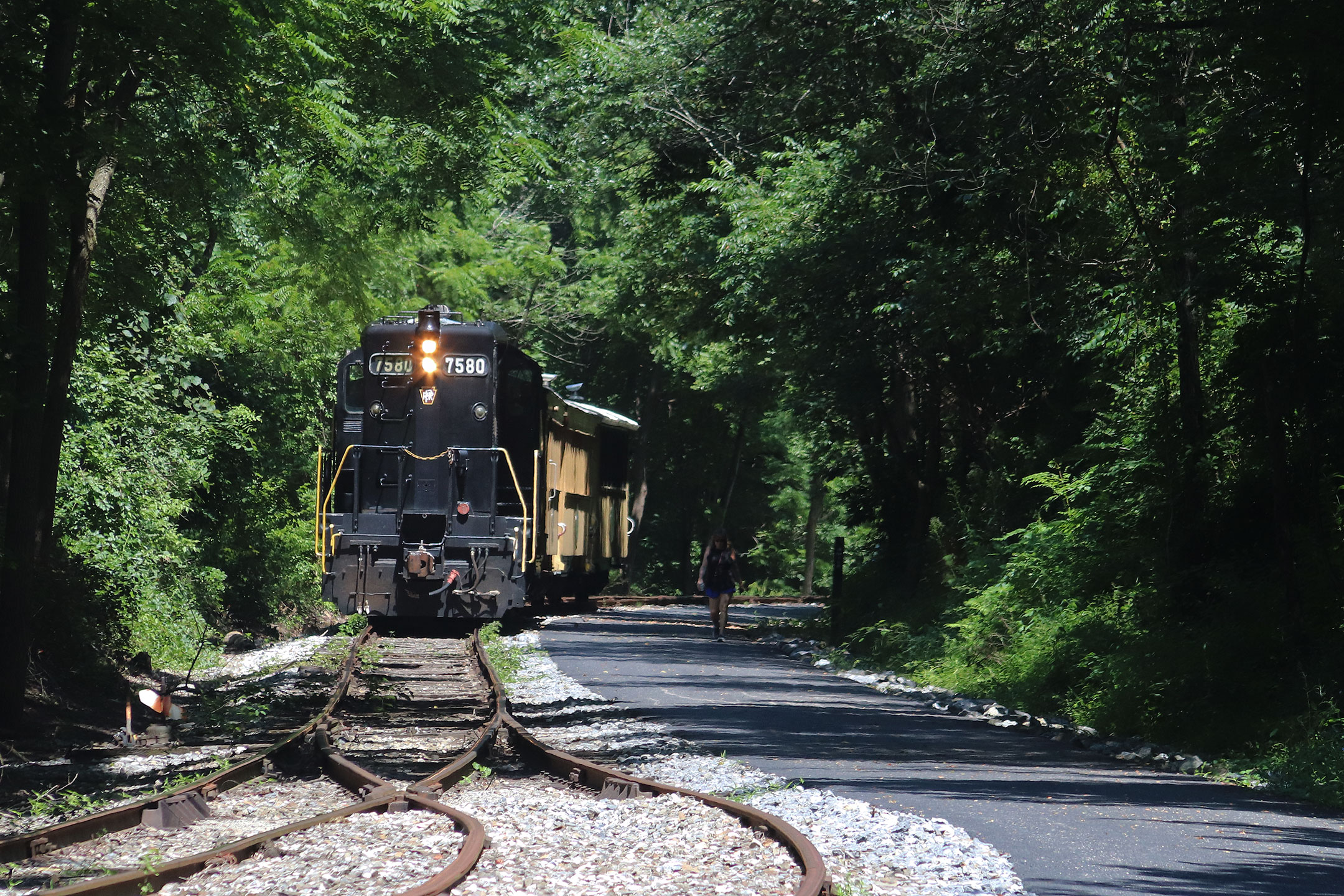 We decided to head over to the STRT when he got back into the station. My friend Dave hadn’t known much about the railroad and couldn’t believe the way it looked as we headed toward the operable section. Even though the track might not be in operation, the scene here at Tolna isn’t going to look much different when it is.

We got to the station at Stewartstown just in time for the train’s departure. Here they are with the crew getting ready to flag Hill Street on their way out of town. I have really come to hate these reflective vests. 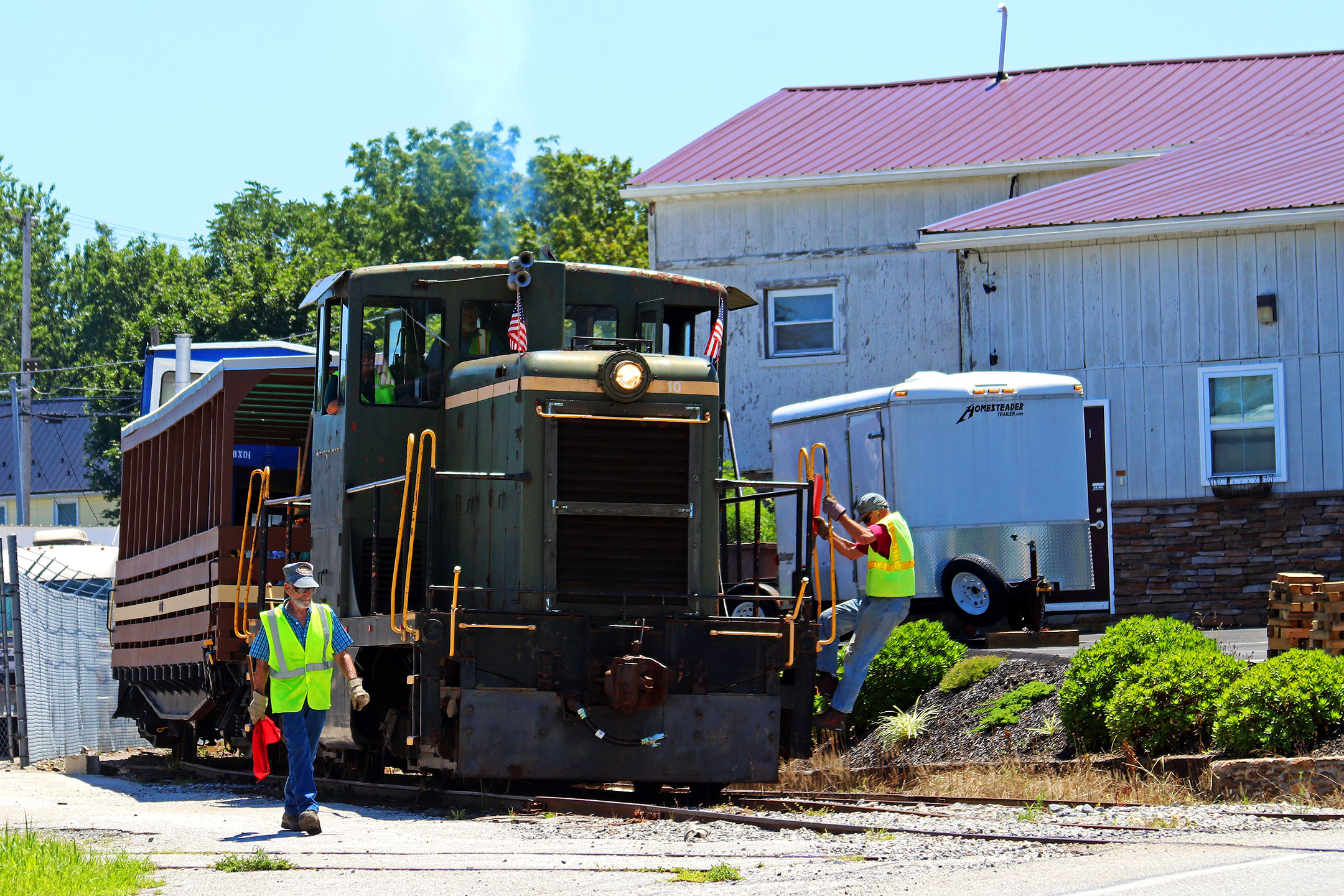 There’s a great sign directing visitors to the home of the STRT right on the railroad’s engine house. 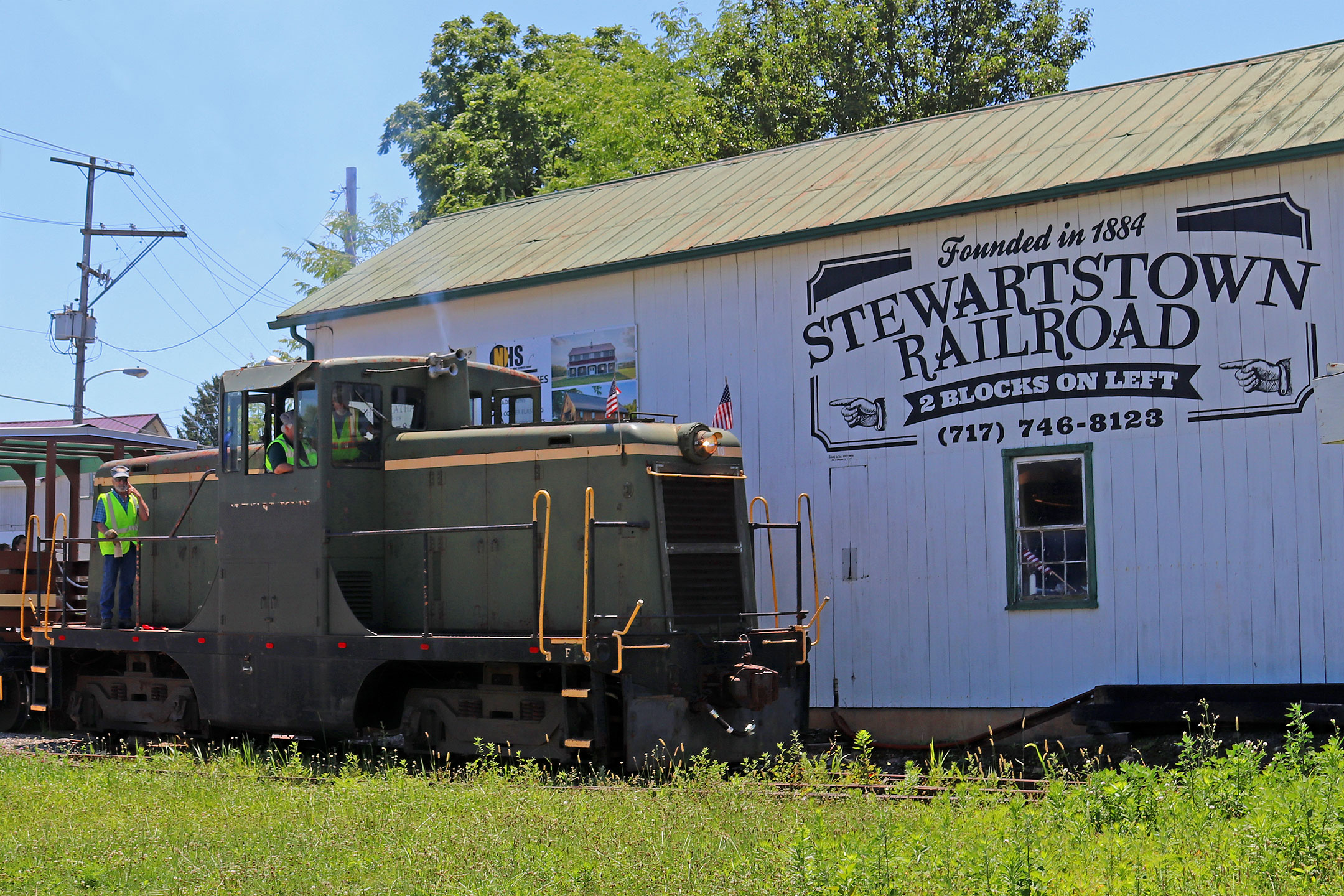 We moved onto the “End of Class 1 Track” at the newly repaired Iron Bridge. This bridge is really interesting since the iron frames, purchased from the original NCR sometime before 1900 are entirely ornamental. The actual load bearing beams were just recently replaced, allowing the railroad to pull out onto the bridge itself before turning back. 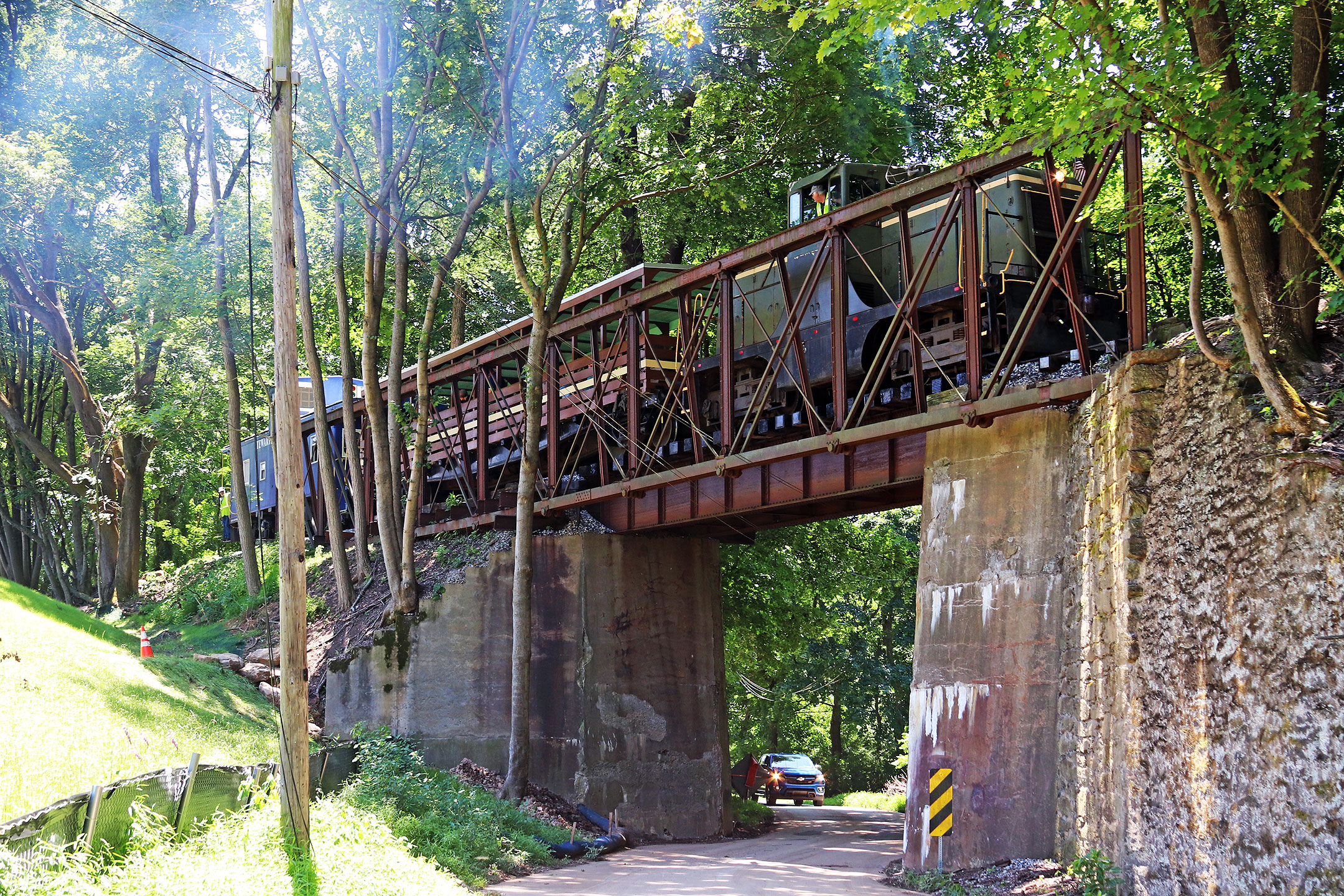 A large part of the Stewartstown’s charm is its “down home” nature. For example, this scene right outside of Stewartstown itself where the track seems to cut right through a field before crossing the entry to a shopping center. Also note the wooden frame affixed to the radiator of #10. The railroad seems lovingly, if not expensively, maintained and is truly fantastic thing. 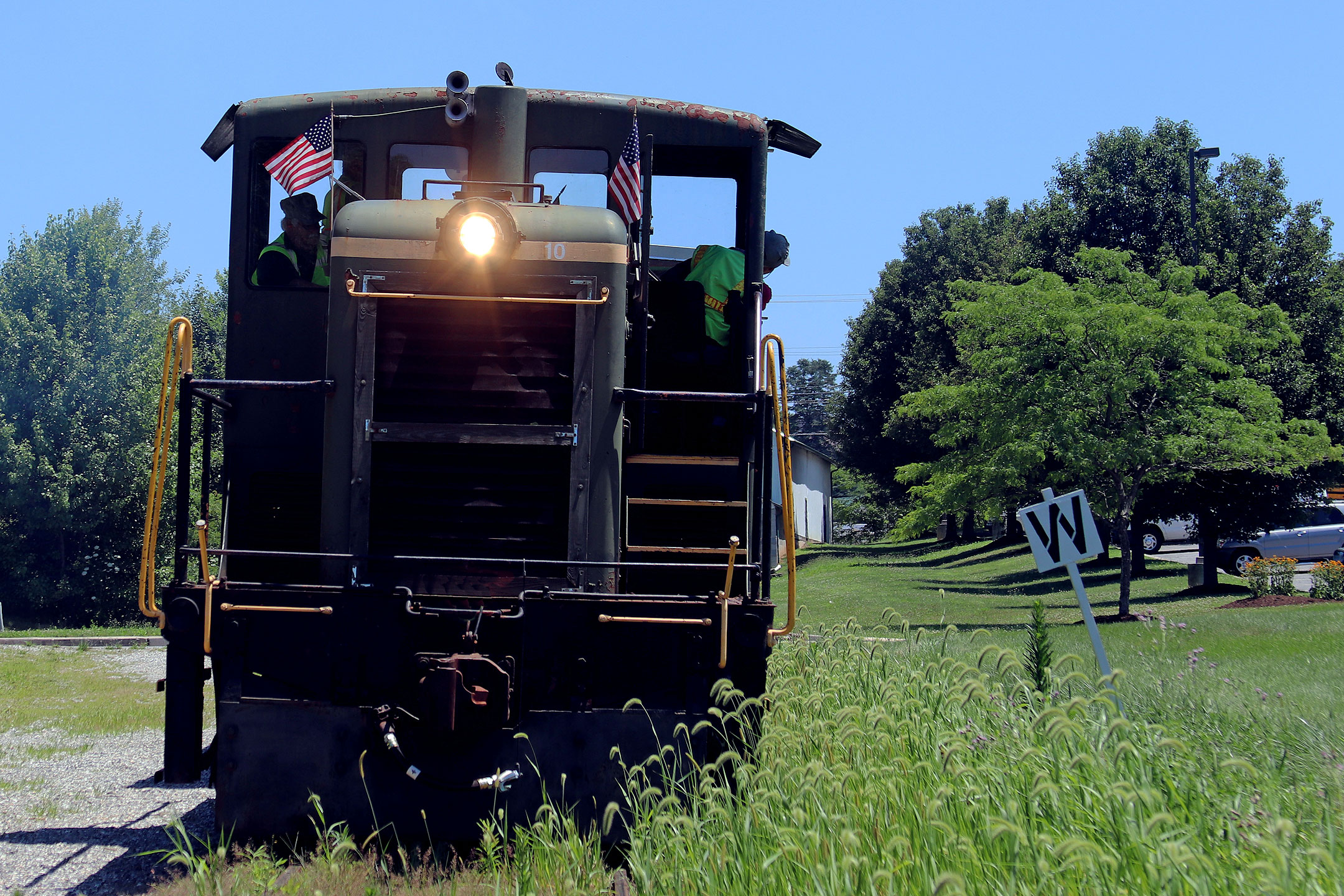 After our chase of the train back to town we turned our eyes toward the wonderful smell emanating from the Stewartstown Smoke House. If there’s one thing better than chasing a 44-tonner through the weeds it’s smoked meats. The Smoke House delivered with a great twist: you can get your sandwich on a York Pretzel Co pretzel roll. Hot damn! In the foreground is my pulled pork, pit ham and pit turkey combo on a pretzel roll. They also had a great beer selection and I’m definitely planning on going back next time I’m in the area. 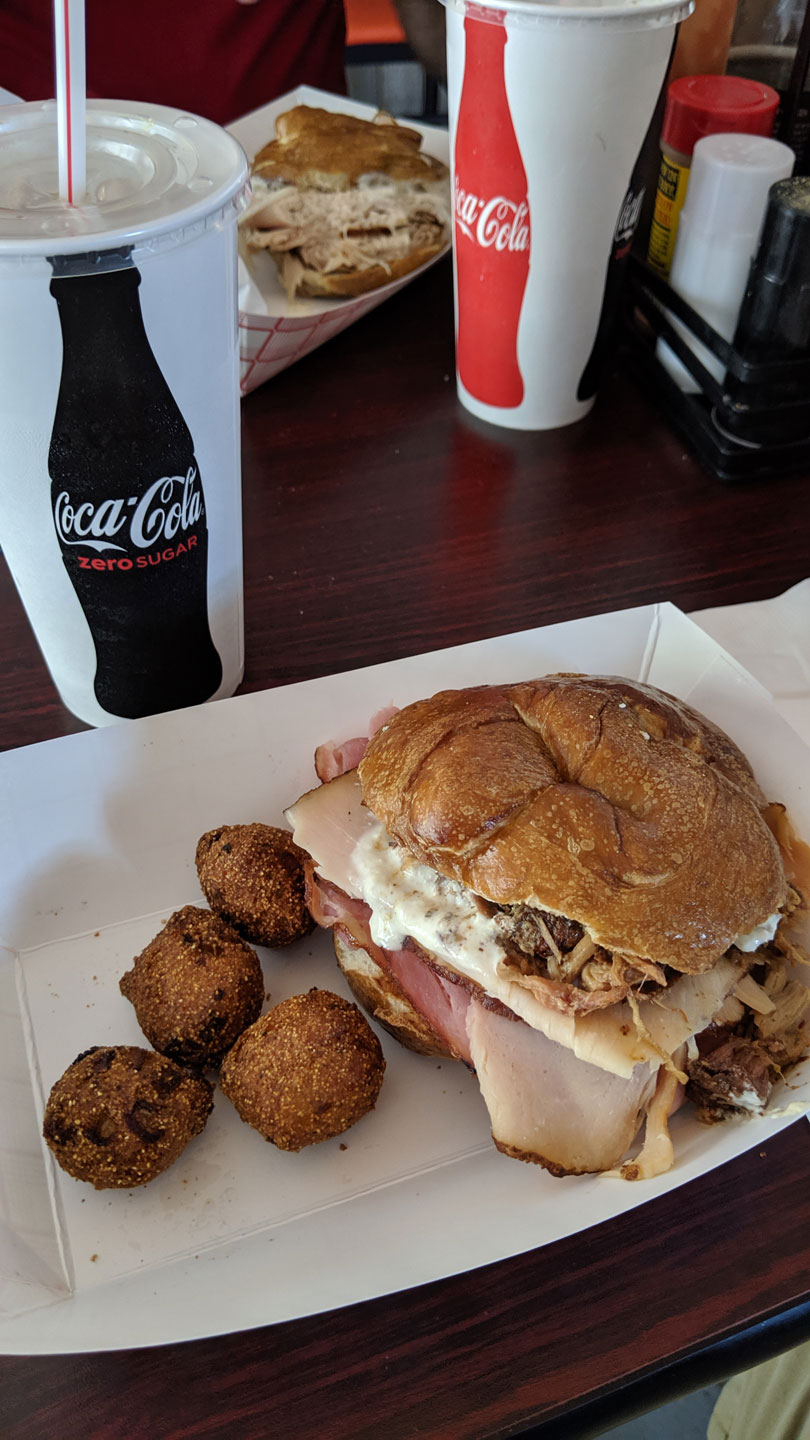 After being properly fortified for the afternoon we decided to ride the Stew’s new open air car. It was the perfect way to experience the railroad that rolls along at a very leisurely pace. The photo below was taken while parked on the Iron Bridge seen in the photo above. 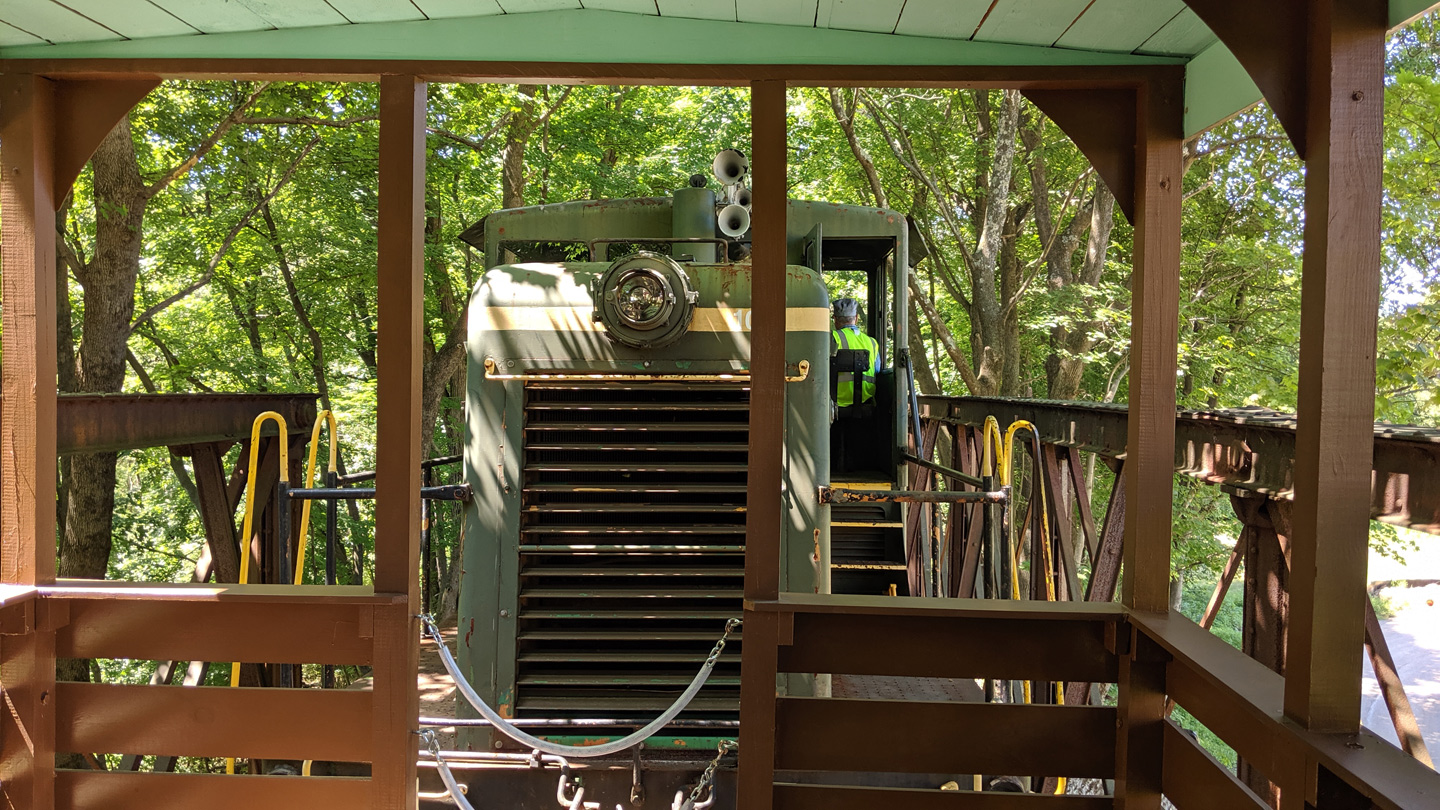 And lastly, to close the day off, here’s a photo of #10’s engineer for the trip looking out through the cab AC on the way back into town. 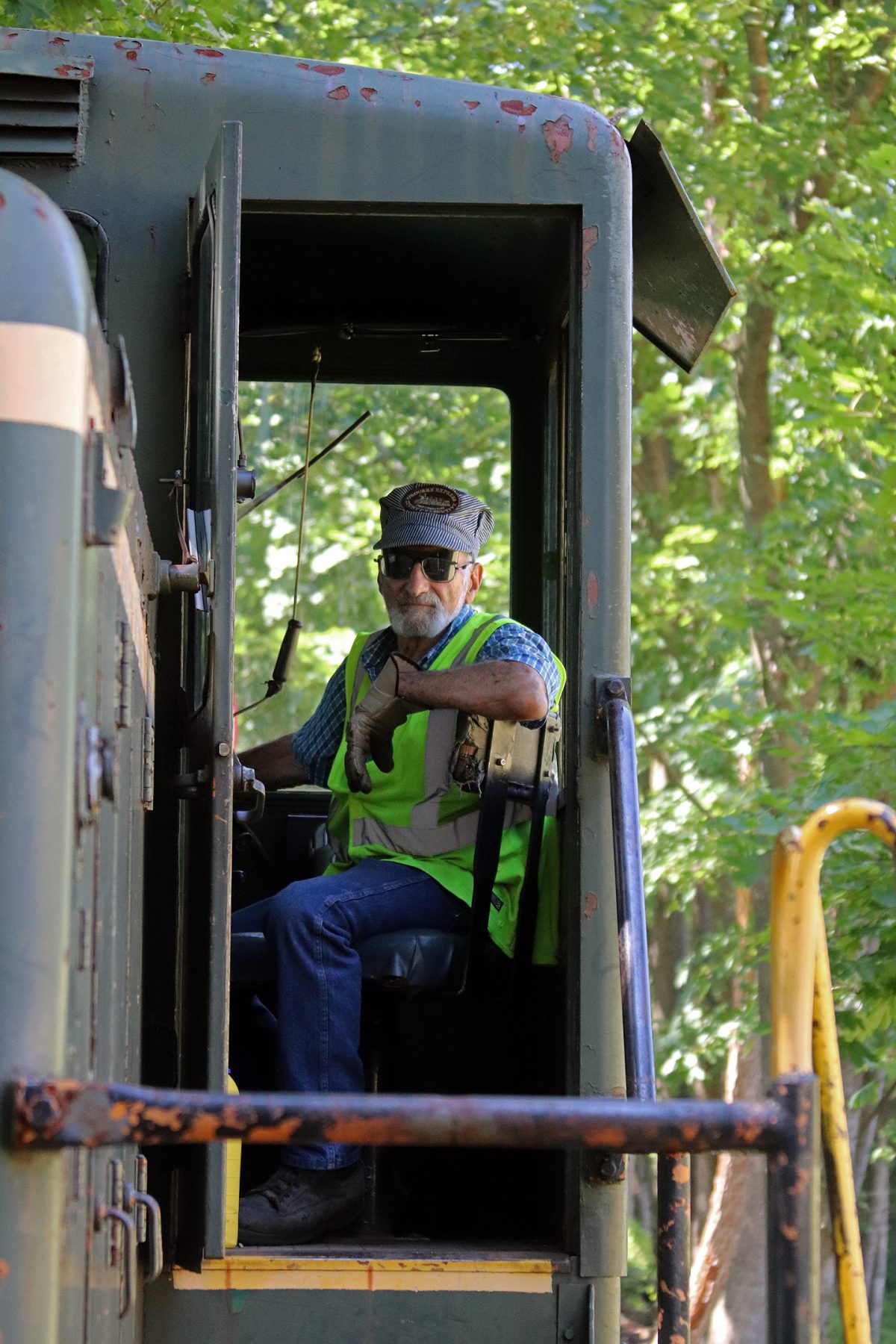 If you have the opportunity to take in either of these railroads I highly recommend doing it. It’s quite a bit different from mainline railroading but I find it even more enjoyable.