Watching John Pechulis Media’s Big Mike videos kindled an interest in the Lehigh Valley. Luckily, my friend Rudy is a bit of a subject matter expert, and Good Friday 2017 provided Ben and I the perfect opportunity to go explore (and eat our way through) the area.

Before the trip even got started Ben and I got out railfanning the night before. We encountered the NS York based local getting ready to move north up the former NCR, so we chased him. Of course I left my camera bag in his house, so a cell phone shot had to do. 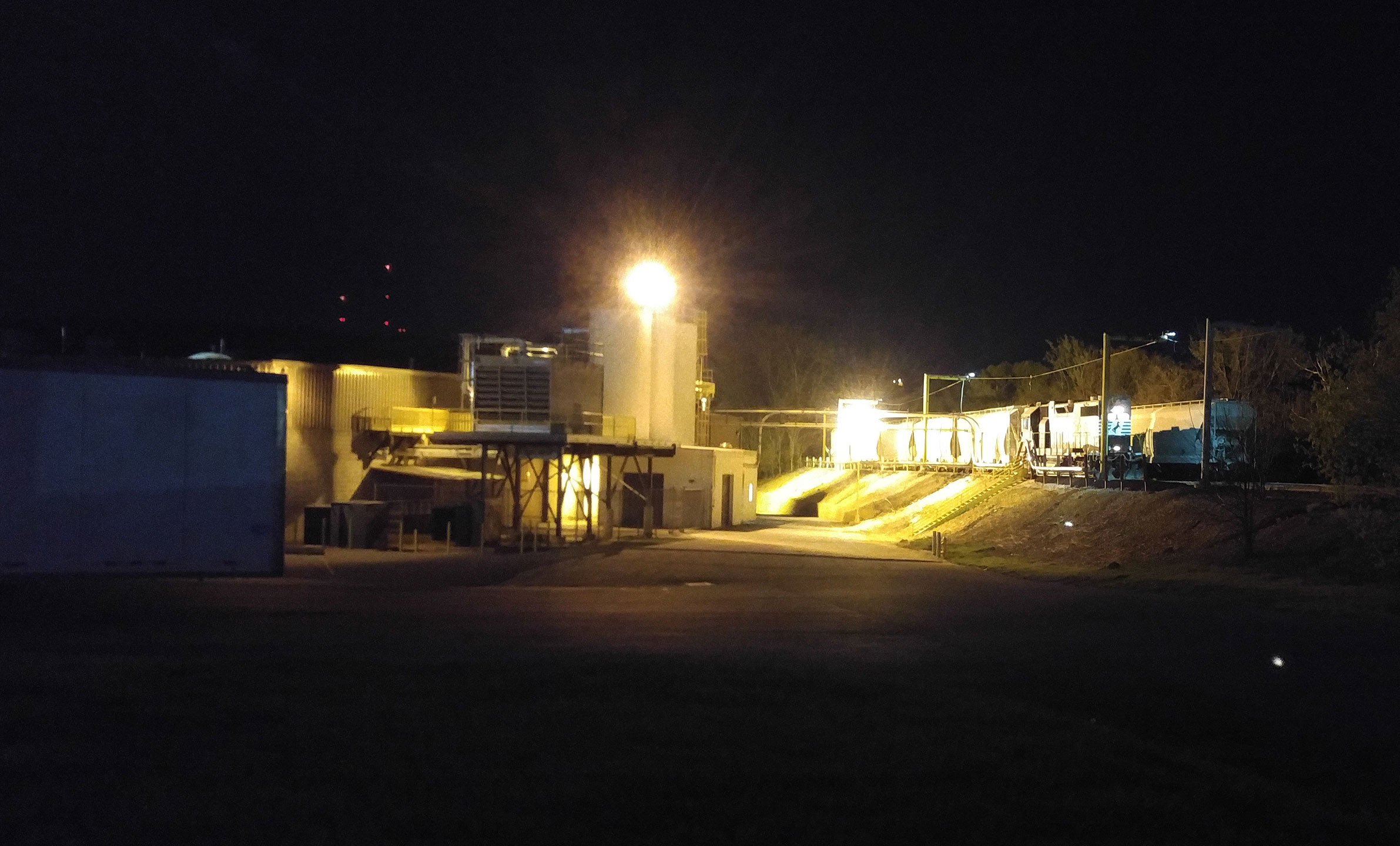 Then it was back to his place and off to sleep to get to the ‘valley early enough to get everything we wanted to do in. Good thing too, because we hit a decent jackpot as soon as we arrived: two NS trains and a trio of Lehigh Valley Rail Management pups coming down to pickup some interchanged stack cars.

Rudy informed us that we needed to hastily move on, however, because the folks at LVRM had emptied Iron Hill Yard, exposing the infrequently visible dead line.

That catch made Rudy’s day this time, since he never seen this happen in all of his years of studying and living in Bethlehem.

With those victories in hand, it was time to focus on our other goal of the trip: taking a culinary tour of places to eat ourselves stupid. The first stop in this noble pursuit was at Vallos bakery, which came incredibly highly rated by Rudy.

Our tour then continued to Allentown Yard, where we were looking to find the NS H75 local so we could begin a chase. He eluded us there, but we did get to see the rare scene of auto racks going over a hump.

Not finding H75 in the yard, we set out to try and catch up with him along the former LNE. We eventually did just that, somewhere south of Bath, where we proceeded to setup and wait for him at the large Keystone Cement mill’s driveway. It took a few minutes, but eventually he arrived. 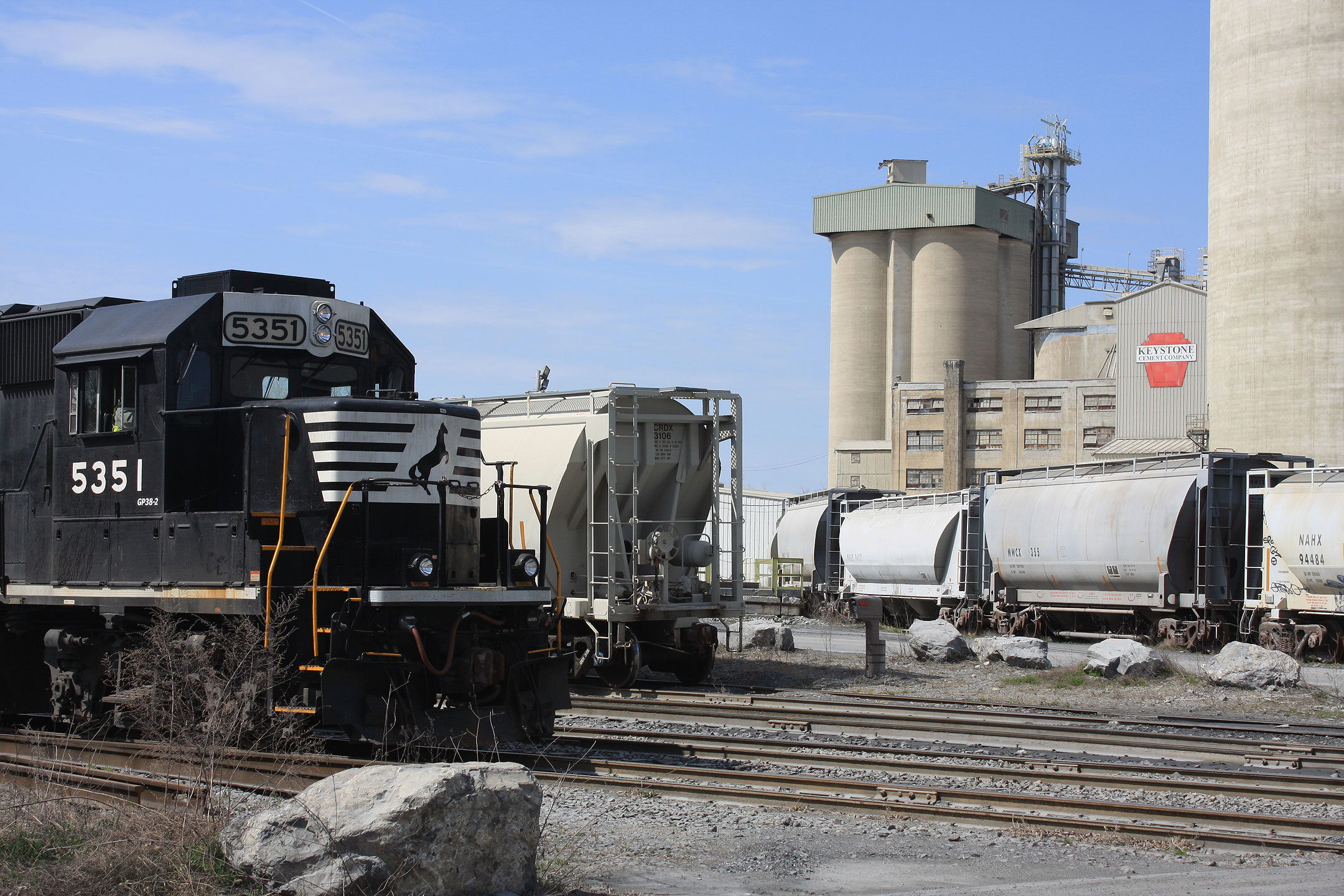 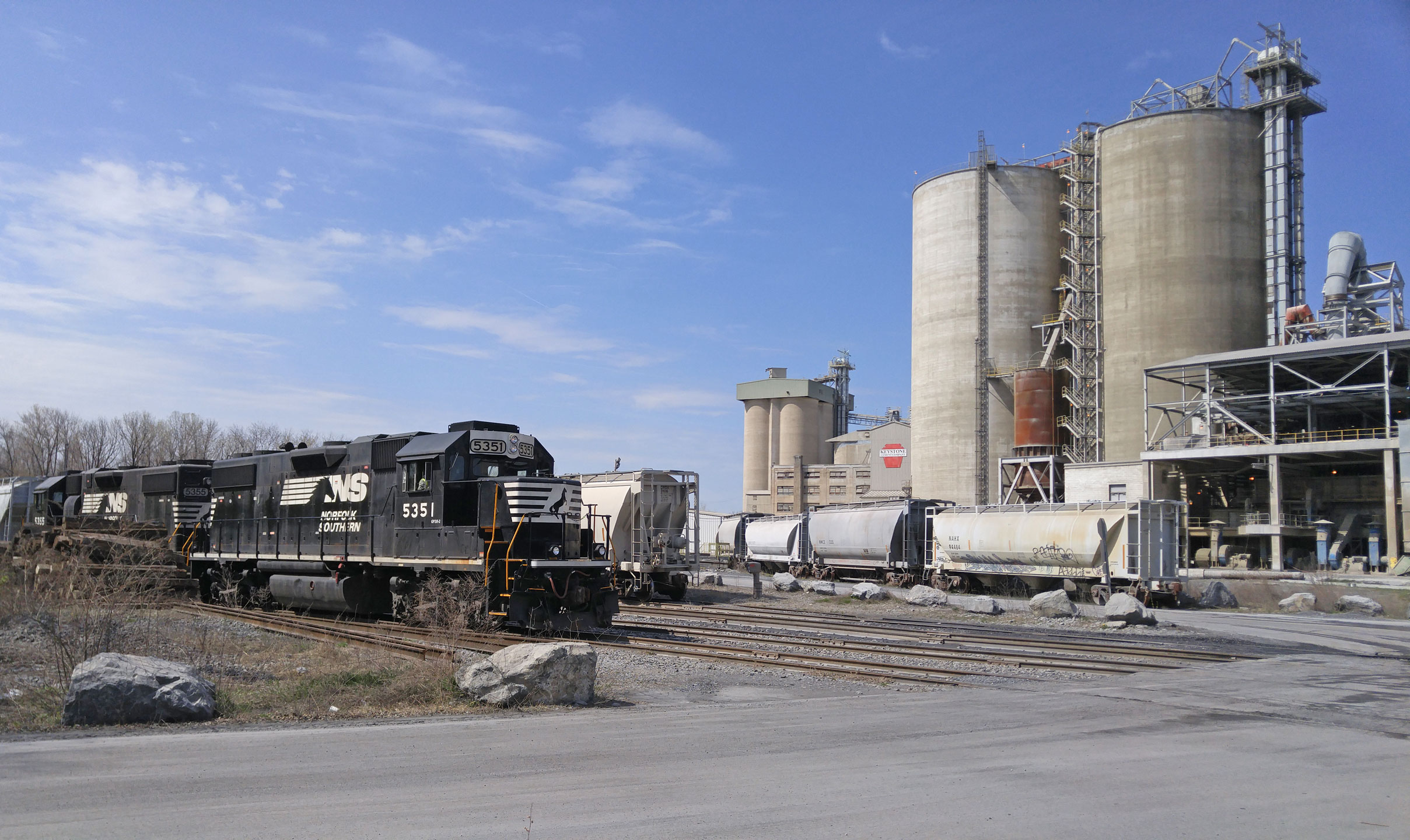 From there, the power tied back onto the train, and they got ready to head north towards to deliver a load of steel poles to a consignee near the former LNE Tadmor yard and to take a load of wood to Stockertown.

We lost the train here, even though we went up to Tadmor. We assume the crew went to lunch, so we did too. This stop on the culinary tour was originally going to be Yocco’s but we decided that since we were so close that we would head to the legendary (at least according to our sources) My Place Pizza in Bath. 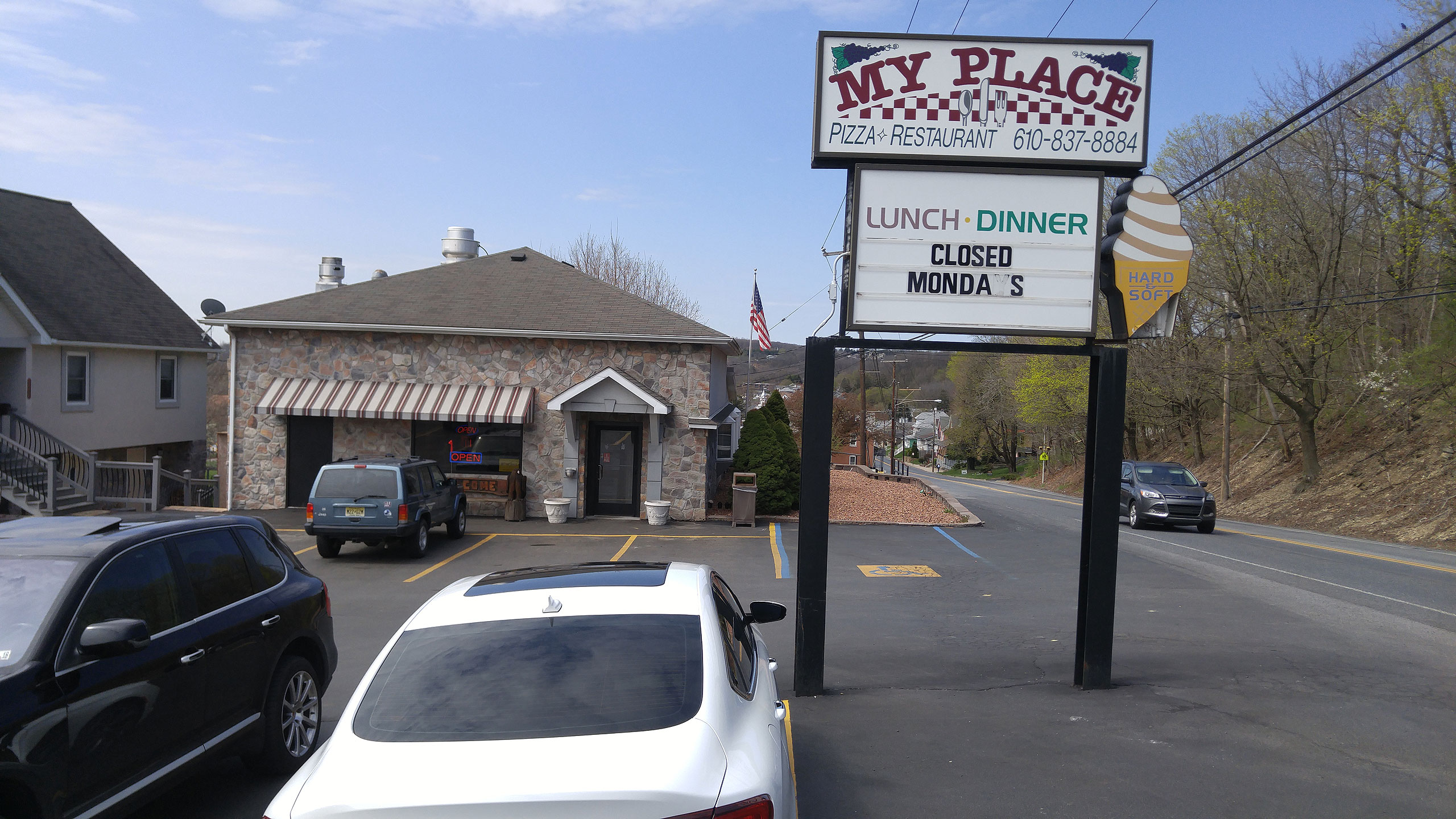 My Place is known for both their pizza and great Lehigh Valley Style cheesesteaks. A valley style cheesesteak is, essentially, what Philadelphians would call a “pizza steak”: a cheesesteak with red sauce. There was a good bit of debate about which one to get, until Ben, displaying the leadership he is known for in his position of Conrail Historical Society President declared that we should just get both.

Everything was delicious. The steaks were properly done and laced with cheese and served in an excellent roll. The pizza was possibly some of the best NY Style I’ve ever had. I got lucky in that Rudy was correct, and we indeed could not finish it all, and I got to hold onto the leftovers.

Feeling quite full, we headed off for more sightseeing, or so we thought. As we took a brief tour of Nazareth PA (home of a former NASCAR track that has almost been completely wiped from the face of the earth), we caught up with H75 again!

Luckily, Rudy knew where to go to catch them when they’d have to run around the remaining car of lumber before they could deliver it to the customer. 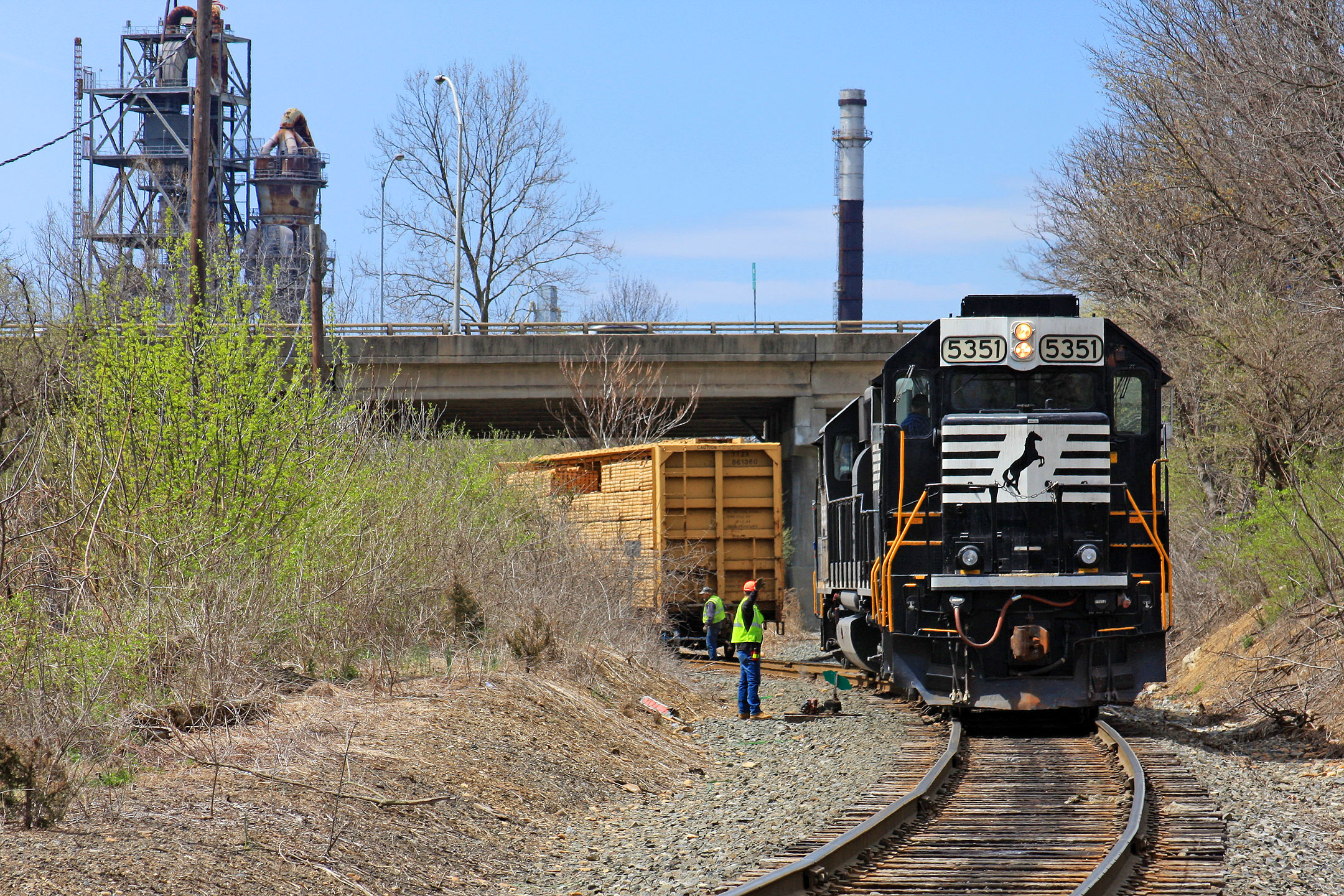 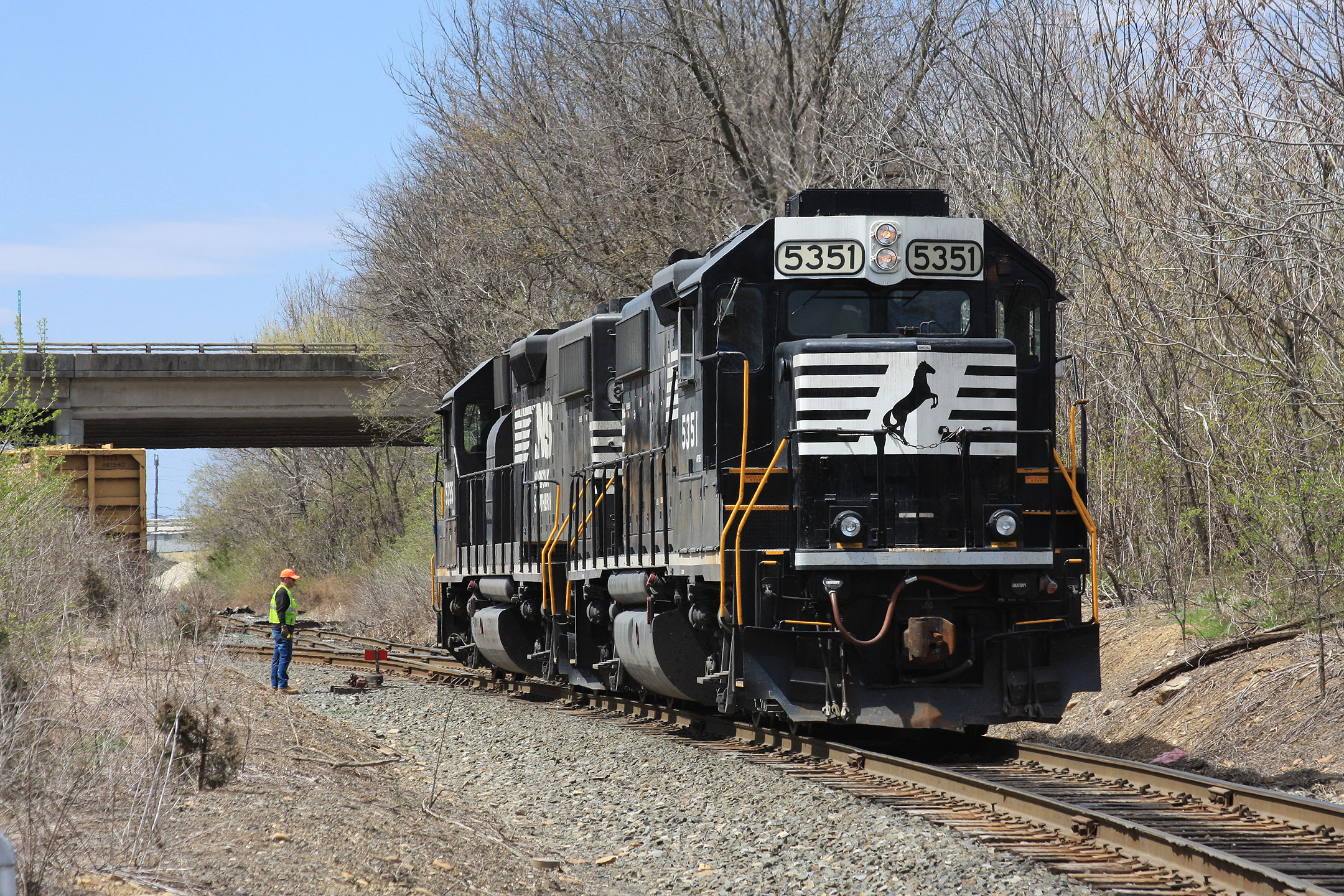 We headed off to the next grade crossing as they were making their move to give us plenty of time to scout out our angles. 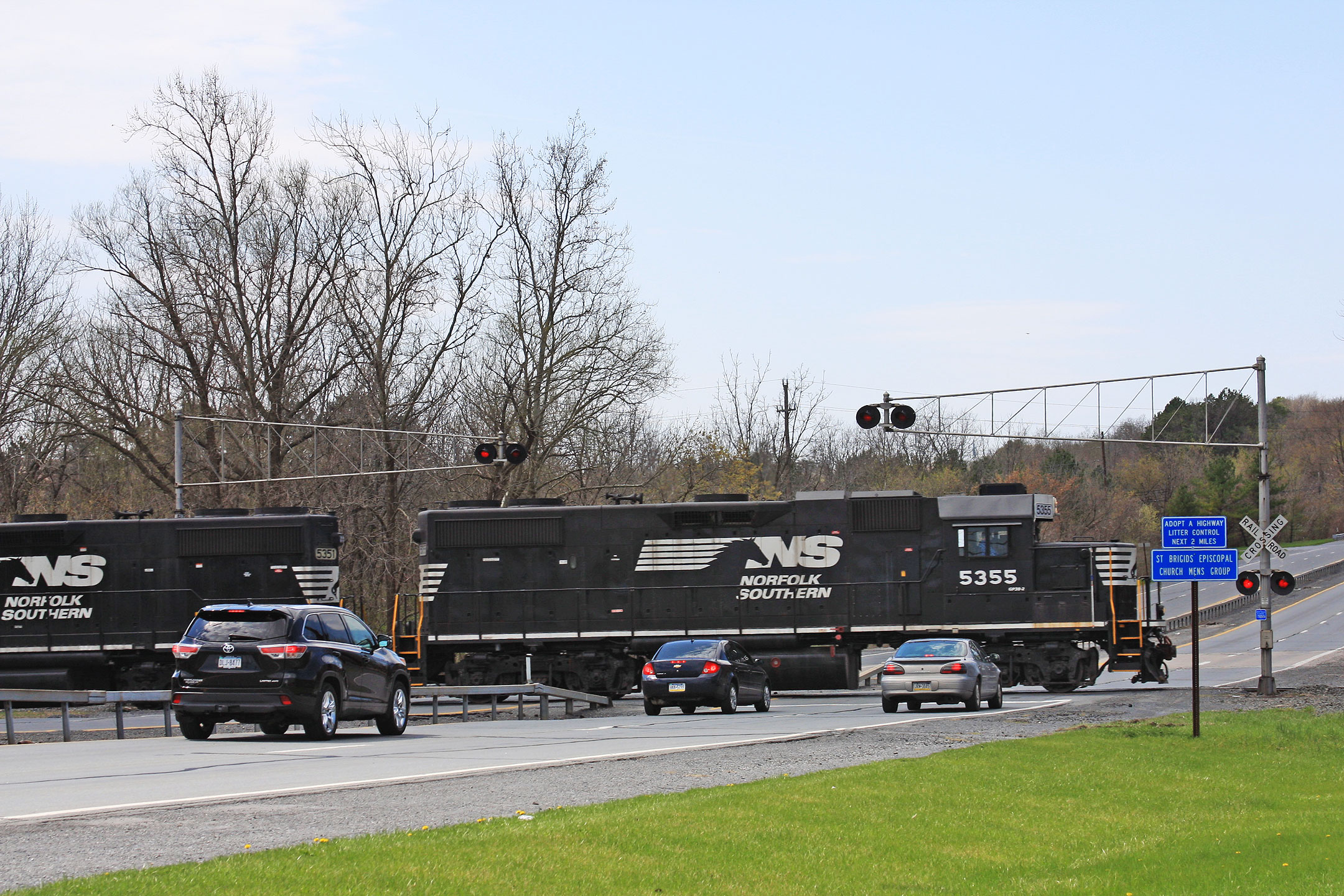 We then headed back towards Allentown for another pass by the hump and a trip to JU interlocking, where the NS Reading Line enters Allentown yard.

From there, our travels took us north through the legendary (again, at least to regular viewers of the Railfanning with The Bednars series of videos) Catasaqua, Biery Yard, and various other locales.

By now, somehow, it was getting to be near dinner time, and we met up with our friend Kevin for another culinary destination: Yocco’s, The Hot Dog King. While Big Mike often made jokes (or not) about getting a dozen dogs, our selections were a bit more meager.

From Yoccos, we headed up to the Lehigh Gap to see another location the videos had made us quite familiar with. It was a sight to see, but I ended up coming away from there and from Palmerton (and the Chestnut Ridge) without any pictures.

It was getting dark, and it was a long trip home, so we dropped Rudy back off at his car and bid farewell to the Lehigh Valley (at least for a few weeks). It’s a great area, rich in railroad history (and with some decent action still), and is well worth a visit.